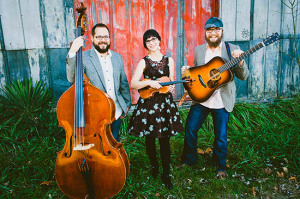 Free music workshop to be given by April and her band before the concert at 4:00 pm.  Bring your instrument if you have one – fiddle, banjo, guitar, upright bass.

April Verch has never sounded more comfortable in her skin than she does now, in the second decade of her career as an internationally touring Canadian fiddler, step dancer and singer-songwriter. Her ninth album, Bright Like Gold, captures a woman who’s fleshed out her identity and is in full command of her gifts, a woman who’s grown from a prodigy into an enduring artist—one of music’s most unforgiving public transitions—with grace and grit to spare.

The April Verch Band—rounded out by bassist and clawhammer banjo player Cody Walters and guitarist Hayes Griffin, who has a Masters in jazz improv from the New England Conservatory—is an energetic, virtuosic, tradition-celebrating outfit, not to mention one that’s not soon forgotten when they depart the stage. It doesn’t hurt that the thrilling grand finale involves Verch fiddling and step dancing—and often executing two entirely different intricate rhythmic patterns—at once.

Something else that’s downright impressive is the range of material Verch, Walters and Griffin inhabit on the new album. She’s so fluent in folk traditions—the Canadian ones she was born into and the American ones she later found her way to—that old fiddle tunes like those featured in the Canadian medley “Dusty Miller,” “Fiddle Fingers” and “Grizzly Bear” and the Appalachian medley “Edward in the Treetop,” “Yellow Jacket” and “Quit That Tickling Me” sound positively reinvigorated.

Originals like her instrumental waltz “Morris & Boris” and country courting number “The Only One” are clearly made to last. What makes the latter song even more special is that Bluegrass Hall of Famer Mac Wiseman’s voice is on it, and he’s not the only guest of note. Premier old-time fiddler Bruce Molsky joins Verch for some handsome dual fiddling on “Evening Star Waltz,” and bluegrass banjo icon Sammy Shelor appears on “Davy Davy” and “Folding Down the Sheets.” Griffin’s “Foolish Heart” offers a playful take on western swing, Walters’ “Raven In the Hemlock” unfurls melodic surprises and Verch’s “Broken” and “Sorry” have real emotional heft. The fact that she also chose to include “No Other Would Do”—the only song her dad’s ever written—perfectly completes the musical circle.

Verch, leader of this self-assured ensemble, is claiming her power as an artist and a woman, and taking charge of her recording process. Produced by Verch, Walters, Griffin, and their engineer Chris Rosser, Bright Like Gold is, quite literally, the album of Verch’s life. It’s a wonder to behold Verch pulling off those pristine double-time triplets with her feet, and the myriad other ways she’s made good on the promise she showed at a tender age by becoming an artist in touch with roots and in her element.

She won’t be the one to mention her championship titles to you, or even the fact that she represented Canada’s fiddling tradition by performing in the Opening Ceremonies at the 2010 Olympic Winter Games. “The accolades are important and noteworthy and special to me,” she says, “but what I think is most impressive to me is that I’ve been doing this full time since 2000. We make a living playing music that we love and it touches other people. I feel like we’re extremely lucky to do that, but also I work really hard, not just at the music, but at every aspect of our career, to make that happen. That we find a way to make it work, and have had that kind of longevity, that’s impressive to me.” And rightfully so. Verch has perfected the art of winning fans for life.

This presentation is supported in part by the Arts Midwest Touring Fund, a program of Arts Midwest that is funded by the National Endowment for the Arts, with additional contributions from the Minnesota State Arts Board, the Crane Group, and the General Mills Foundation.