Nik is a research-based storyteller, filmmaker and photographer. He is interested in oral histories, vernacular folklore and local legends, being equally informed by documentary journalism and avant-garde forms. His work often involves essayistic interventions in archival materials to explore regional histories, focusing on contested histories that stand at the intersection of power, memory, race and place.

While in New York Mills, Nik is documenting the 8th Annual Puppet Pageant! He is filming workshops, the final pageant, and conducting interviews.

Nik has a BFA in History and Documentary Filmmaking from The Evergreen State College in Olympia, Washington. 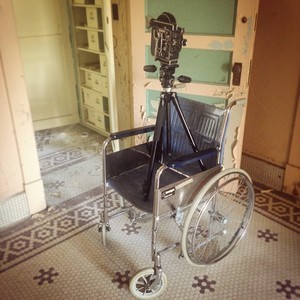 Officer-Involved Shooting: Surveying the geography of white violence. An interrogation of the landscapes where Trayvon Martin, Walter Scott and Jordan Davis died at the hands of police, both state-sanctioned and self-appointed.

Today I Am Going To Kill Myself But First I Am Going To Dance: An experimental documentary and ongoing placemaking project about the legacy of the Fergus Falls State Hospital in Fergus Falls, Minnesota. Completed as part of the Hinge Arts Residency on at the invitation of Springboard For The Arts.

MANIUM: An abstract exploration of the myths and stories surrounding the culture of the very real Olympia black houses and their owner, Duane the Dark Dentist.