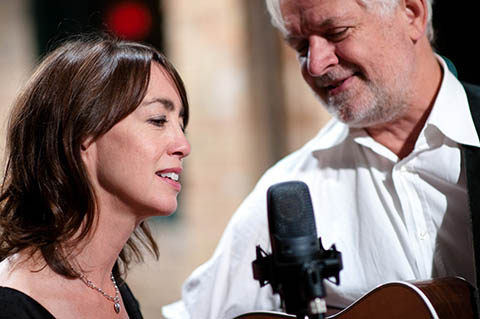 Call 218-385-3339 to reserve your tickets to this concert by local Minnesota singers Bill and Kate Isles.  They hail from Duluth and are on their first trip to New York Mills in more than 7 years.  Concert starts at 7:30 pm and admission is $12 advance reservation or $15 the night of the concert.  Students get in for only $5, and everyone gets a $1 off the admission price by bringing a non-perishable food item for the Mills Food Shelf.

Bill & Kate Isles are an acoustic singer/songwriter duo based in Duluth, Minnesota. Using a wide variety of musical styles, their performances carry audiences through a broad landscape of experiences from metaphorical worlds to small town family stories and to zany comedy. Consummate performers, they are known for their catchy melodies and memorable songs. They have a deep-seated love for the audience, and each other, and it shines before, during, and after the performance. They tour nationally, presenting their profound songs for audiences large and small, from house concerts to festival stages and everything in between. Words like “Mesmerizing”, “Transcendent”, and even, “Hysterical” are common descriptions from audience reviews and audiences members feel that they are listening to stories of their own lives, told by two of their best friends.

Bill Isles (Born and raised in Duluth, MN) performed his first show of original songs, after a twenty-five year hiatus, in February of 2000. Since that time, he has become one of the most well known singer/songwriters in the Minnesota acoustic scene and has been getting national and international attention. Bill’s love of life has strong roots in his childhood, but his urgency to tell these stories comes from an experience in 1993 when, with just enough warning to drive himself to the hospital, he experienced a Sudden Cardiac Arrest. He arrived with just ten minutes to spare. After being defibrillated, and before the doctors had time to detect and open a blocked artery in his heart, he made a commitment to himself that, if he survived, he would begin to write again. Those paddles restarted more than just his heart…

Kate Isles (Born in Tecumseh, NE, raised in Rochester, MN) was a closet singer/songwriter when she came to a CD release concert for Bill’s first CD, “Weightless” after hearing a public radio interview. She bought the CD and signed up on his e-mail list. (“Grounds for marriage!” quips Bill). Their song, “Public Radio (A True Story)” is a delightful duet that chronicles these beginnings.

Their relationship began in the ensuing months as they enjoyed afternoon sessions with guitars, harmonies and coffee. They’ve been together ever since, marrying in May of 2004. They have toured nationally as a duo, full-time, since early 2007, performing about 150 shows per year. Their late-2011 duo album, “Still Beneath the Stars and Moon”, includes ten new original songs, and showcases their respective songwriting with several of Kate’s songs as well as a few they’ve co-written. The response has been very positive with many comments such as “We’re wearing out your CD, we listen to it all the time!”; and “It’s the perfect blend of two voices”.

Special thanks to Trisha McCarthy of Pine Lake Township for her sponsorship of this concert!