Brian Laidlaw is a poet, songwriter and educator from San Francisco, currently living in Minneapolis. He studied Creative Writing as an undergraduate at Stanford University, where he first began setting his poems to music. He graduated in 2005.

In 2008, Laidlaw moved to Minneapolis to earn an MFA in Poetry at the University of Minnesota. His poems have now been published in journals including New American Writing, The Iowa Review, Handsome, Volt, Quarter After Eight and dozens of others. He also had poems in the Arcadia Project anthology, song lyrics in American Songwriter Magazine, and a Songwriting Consultant credit on the Grammy Award-Winning album Can You Canoe? by The Okee Dokee Brothers.

His first full-length collection of poems, The Stuntman, was published – also with a companion album of music – by Milkweed Editions in 2015. A follow-up collection called The Mirrormaker is also forthcoming with Milkweed.

Workshop at 6pm and Concert at 7:30pm

Note: The Songwriting Workshop is Free and Open to All!

“There are a lot of poets who incorporate music when performing their poems. However, Laidlaw has an unusual approach to putting poetry and music together. Rather than presenting a poem with supportive musical accompaniment, he alters the original poem to make it more effective as a song lyric. Often, when altering the poems he looks for ways to increase repetition of key ideas in order to give listeners a better opportunity to keep up with the flow of information being presented. Brian knows that it takes conscious effort to reach excellence as both a poet and songwriter and so he keeps pushing his skills in both arenas.” 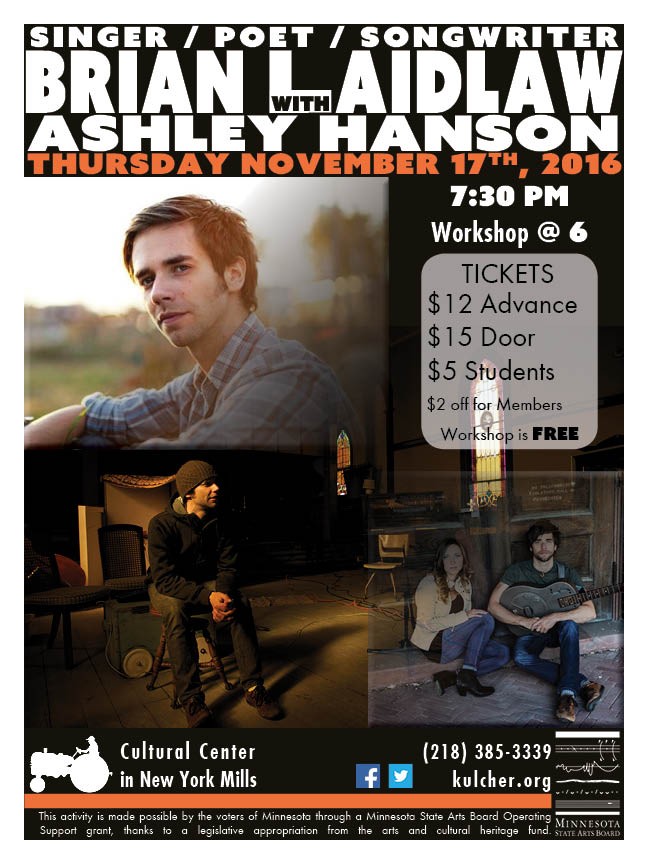