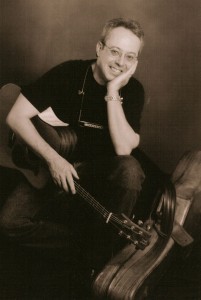 For Charlie Maguire, growing up in upstate New York, the die was cast early on: When a friend’s brother joined the Navy and left a guitar behind, a teen-age Charlie borrowed the instrument, paid $2.95 for a book entitled Play the Guitar in 30 Minutes, and unceremoniously commenced what would become his life’s work. By the mid-’60s, he was hanging around the folk centers in New York City and Boston, learning from pioneers of the folk music revival–people like Pete Seeger and Lee Hays–and from the new breed of folk performer–the likes of Arlo Guthrie and Holly Near.

He attended Northland College in Ashland, Wisconsin, graduating in 1970 with a degree in liberal arts. Then he took his guitar west and served in VISTA, teaching English as a second language, collecting songs, making field recordings and publishing a songbook for teachers and children of migrant workers in western Nebraska and eastern Wyoming. He eventually set up a circuit of appearances in schools and Head Start centers throughout that area, each week singing to the children and families of migrant sugar beet workers, farm owners and cowboys.

Following VISTA, Maguire moved to Minnesota, where a chance meeting with Garrison Keillor in the fall of 1974 led to 10 years of regular appearances on public radio’s ever-popular A Prairie Home Companion. During that time he wrote and performed some of his most-requested songs: “Goodnight Baby,” “Play Us A Waltz,” “I’m From Minnesota,” “Talking Home Improvement” and “Getting in the Cows,” which is included on APHC’s Tenth Anniversary Album.

Now with some 800 songs and seven albums to his credit, he still takes requests from enthusiastic coffeehouse and festival audiences coast to coast. His songs have been featured on the CBS Evening News, Car Talk, Hometime, As It Happens, and other nationally broadcast programs.

He co-wrote the musical Mesabi Red (1990), which chronicled a 1916 miners’ strike on Minnesota’s Iron Range. He also composed the music for Orphan Train( 2000), a play about the trainloads of immigrant orphan children that made their way from the slums of New York to Minnesota at the turn of the century. Both plays were produced by the Great American History Theatre in Saint Paul, and became the highest-grossing shows in that theater’s history.

In 1991 Charlie Maguire was appointed the official “Centennial Troubadour” for Minnesota State Parks; a title he still holds. He produced “Stepping Stones” an album of songs about Minnesota State Parks and the outdoors. After writing and producing the album, he traveled over 14.000 miles in the next six months, completing over 130 concerts. One of his songs, “Mary Gibbs,” led in part to the establishment of the “Mary Gibbs Headwaters Visitor Center at Itasca State Park in 2005.

From 1995-2003 Charlie officially became “The Singing Ranger” of the National Park Service. Earning the “Freeman Tilden” award by the National Parks and Conservation Association in 1997 for “outstanding and innovative interpretive education”, Charlie was an unusual choice for that honor because he had only been a ranger for two seasons up to that time. Producing an album of songs about the upper Mississippi River and premiering it on “Good Morning America” during the “50 States-One Nation-One Year Tour; Charlie as “The Singing Ranger” showed the uniform and reached 4.5 million people across the nation in a single day.

Long Way to Another Friend; (re-issued with “Biography” as double album, 1998)

Biography (re-issued with “Long Way to Another Friend” as a double album, 1998)

This program is sponsored by Viking Library System and the New York Mills Regional Cultural Center and it is funded in part or in whole with money from Minnesota’s Arts and Cultural Heritage fund.