Compromise wins the argument at the 21st annual Think-Off 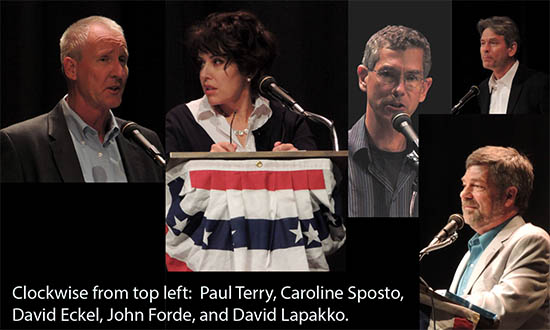 Choose the link to each finalist to open a copy of her or his essay.

The 2013 Think-Off question has been resolved. Paul Terry, the CEO of StayWell Health Management, a national wellness company based in Eagan, Minnesota, won the debate and a gold medal with his argument that it is more ethical to compromise than to stick to one’s principles.

Mr. Terry will hold the title of “America’s Greatest Thinker” until June 2014 when four new debaters will contest a new question. Explaining why he believes compromise is the best way, Terry argued that “it’s not just about doing good or not doing wrong. Advancing the good of the community is important.” Terry quoted Thomas Aquinas that true love “is not love of but love for.”

Winning a silver medal as the runner up, Caroline Sposto from Memphis, Tennessee gave a spirited defense for the ethical necessity of sticking to principle. Caroline, a fiction writer, proposed, “Compromise should be the last resort, not the first.”

Bronze medals were awarded to David Eckel, an IT consultant from Clayton, North Carolina (on the side of principle) and David Lapakko, a professor of Communication Studies at Augsburg College in Minneapolis, Minnesota (proposing compromise). David Eckel (who was the gold medal winner in 2010) wrote “the ethical option is not willing compromise of principle . . . it is instead . . . to engage in the hard work of questioning one’s principles and the equally hard work . . . of sticking to them.” Professor Lapakko argued that compromise “shows a healthy respect for others and a healthy degree of humility as well.”

John Forde, host of the Public television show “Mental Engineering,” moderated the 2013 Think-Off debate. The audience at the debate chose the winner after listening to the finalists’ answers to questions prepared by the Cultural Center and by the audience on June 8th.

The Great American Think-Off is a project of the non-profit Regional Cultural Center in New York Mills, Minnesota. Finalists each receive an honorarium of $500 plus transportation and expenses to attend the annual debate held in New York Mills. The 2014 Think-Off question will be published on the Center’s website on January 1, 2014. Anyone may enter by submitting an essay of up to 750 words before April 1st. There is no cost to submit an essay. The McKnight Foundation and many local businesses and individuals provide financial support for the Think-Off.