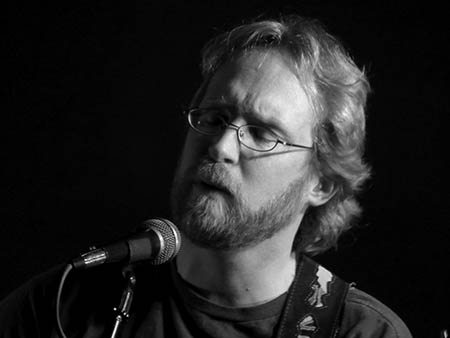 Friday, March 8th at 7:30 pm at the Center.  Call 218-385-3339 for ticket reservation.  Advance sale price is $12, or $15 the night of the concert.  Student admission is $5 and anyone who brings a donation for the Mills Food Shelf gets a buck reduction in the admission price.

Dave has appeared at the Center several times for the Longest Night Music Festival.  We are really happy to have him back as a headliner along with Beth Wood, his Oregon-based friend and musician.  He and Beth are accomplished musical artists, writing songs, playing multiple instruments, and singing their songs with power and musicality.

A little about David
He plays mostly house concerts and concert venues, and also spends time promoting the work of independent singers and songwriters through his radio program, Northern Roots Radio. He’s a pretty good cook.

He’s played at the Bluebird Cafe in Nashville, for example, and at the Kerrville Music Festival in Kerrville, Texas. These days, he plays mostly house concerts. He’s shared the stage with people like Juice Newton, Leon Russell, Rik Emmett, Lou and Peter Berryman, Michael Smith, and Pat Donohue. He was once mistaken for George Winston at a bookstore in Milwaukee. True Story. He has won the Kerrville New Folk award, as well as songwriting awards at the South Florida Folk Festival, the Minnesota Folk Festival, and others.

And, a little about Beth
With grandiose dreams of becoming a musician, a baker, or a cowgirl, Beth left west Texas to study voice and piano at Brevard College in North Carolina.  A detour from her classical studies led her to Austin, where she picked up a degree in literature and a guitar.  Beth began writing her own songs and quickly discovered a feeling of musical freedom that she has been hooked on ever since.  Fifteen years, thousands of shows, nine albums, three cars, and numerous awards later, Beth has never looked back.  Beth’s exceptional musicianship, crafty songwriting, and engaging, energetic stage presence have been winning over audiences from coast to coast.

“The Weather Inside,” Beth’s eighth studio release, is a case study in contrast.  A coming-of-age statement record from a veteran artist, Beth’s latest work embraces strength and tenderness, the polished and the well-worn, the broken and the hopeful heart.   Produced by Billy Crockett at Blue Rock Studio in Wimberley, TX, “The Weather Inside” delves deep into Beth’s creative reserves and delivers a strong collection of songs and performances to remember.