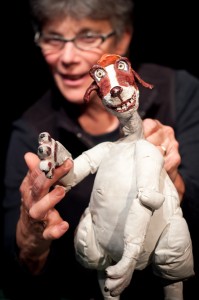 Special note: Margo will give a “hands on” puppet workshop at the Elder’s Home in New York Mills at 2:00pm and a complete show at our usual performance time at the Center (7:30 pm).

When I reflect on my creative life, being open to possibility, and having a great sense of play are ways of being that helped me find my path into a lively art form that has captured my imagination. The beauty of puppetry is that it is grassroots and very permissive: anything goes and it can be made out of anything. Imagine an art form where you get to wander in hardware stores, fabric stores, alleys, thrift stores, loading docks of appliance stores. It is a beautiful material world where things can be transformed! I draw, sew, sculpt, paint, hammer, give voice to objects, and move them.

I have created a few puppet characters who are the center of my work. Ollie McNutt is a 7 foot tall puppet I have animated since 1980. Jack the Dog has been sniffing out adventures since 1999. The stories I create are particularly for these characters. Movement grabs me. I am practiced in the world of bringing objects to life with movement, voice, and spark of spirit in the moment. I believe that my creations mirror the generosity of life, and, as an artist, it is this that I want to share with others.

Spring 2011, I fulfilled a dream of making a vibrant full-length puppet show, Diggity Dog Days starring Jack the Dog. I also teach children and adults many forms of puppetry in residencies and workshops, with a particular focus on puppet movement. I received an Artist Initiative grant in 2011 from the Minnesota State Arts Board. I have been a self-employed artist for over 25 years.

An adult puppet show about an irrepressible dog and his aging owner, created and performed solo by Margo McCreary, with live music and original songs composed by Marya Hart and drums and percussion by Bruce Wintervold. Directed by Zaraawar Mistry.

When changes in his aging owner’s life begin to affect his everyday routine, Jack the dog responds doggedly, causing confusion and distress for all. An unexpected adventure to the dog park threatens to only make matters worse, but a brood of neighborly urban chickens intervenes to save the day! Set to a jazzy score with lively original songs, Diggity Dog Days is a paw-lickin’ good frolic on heartache and hope.