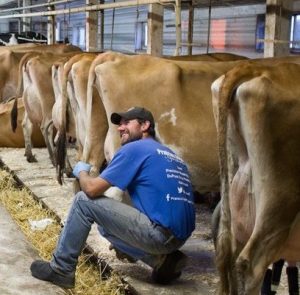 Jon Solinger was born in 1959 in Pelican Rapids, Minnesota. He received his BA in art with photography emphasis from Minnesota State University Moorhead in 1985, and currently resides with his wife and their four-year-old daughter in Lida Township, Otter Tail County Minnesota, maintaining a studio there and working as the third generation owner of Solinger’s Resort on Lake Lida.

Solinger’s recent photographic work involves rural places in his region, observing how physical and human geographies shape each other, and making photographs in response to subtle and ordinary beauty. In 2000

the North Dakota Museum of Art commissioned him to photograph extensively the shelterbelts on the Red River Valley’s agricultural lands. The Museum mounted an exhibition of the photographs, which subsequently toured for two years, and has become part of the Museum’s permanent collection. 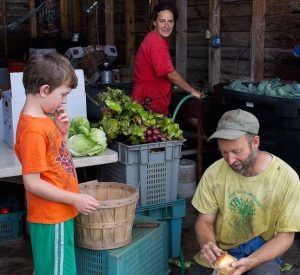 His most recent project, Working Land, lyrically documents people’s attachment to a place through work. Through these photographs he seeks to discover the meaning behind the rural visual landscape, employing both portrait and landscape images to explore the integration of work and land in rural life.

Solinger has exhibited regionally, including the North Dakota Museum of Art in Grand Forks ND, the Rourke Art Museum in Moorhead MN, the Plains Art Museum in Fargo ND, and galleries in Minneapolis, Fargo, and Fergus Falls, MN.

Blayze Buseth grew up in Fergus Falls, Minnesota. In 2012 Buseth pursued his ceramic career after winning the Downtown Fargo Art Competition where he was the featured artist of the Fargo street fair. In 2013 Buseth studied in China at one of the oldest pottery cities in the world. There in Jingdezhen, he studied with West Virginia University, 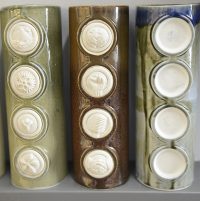 mentored by art history professor Walter Ostrom an Internationally renowned potter. In 2015, Springboard for the Arts sponsored Buseth to start a business creating personalized celebratory/memorial artwork. With their help, he secured a crowd funded KivaZipp loan to open his studio in Fergus Falls and began creating his different artist collections.

In this show is a series of artwork that began out of an interest in representing people through symbolic carvings.

Attributes are the symbols that reflect personal traits. They symbolize health, strength, compassion, wisdom any many other unique characteristics. These traits were turned into images and carved into medallions. They were designed to represent your traits or traits you aspire to possess. Combining four traits creates the attribute vase. These vases can represent you or a loved one through the imagery select. They act as story boards for future generations to look at.

The Archetype is a vessel that represents a specific character model. There are many different characters that are found in common in stories myths and legends throughout the world. One of the most common characters is the Hero. The Hero has a common thread that guides the course of life. The quest, trials, climactic moment and the return home are stages in every hero’s journey. Besides the Hero there are many archetypes. The child, Mother, joker and the wise old man to name a few. These characters have common characteristics. The Archetype depicts these characters through symbols and form.

It is FREE to See & Open to All