High energy & amazing musicianship in a fusion of newgrass and rock 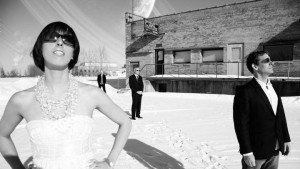 The Galactic Cowboy Orchestra (GCO) is a unique and powerful musical ensemble that fuses an eclectic mix of original and traditional bluegrass-edged tunes with jazz and world/fusion elements. Their music is Chick Corea meets The Dixie Dregs meets A Prairie Home Companion. The mix ranges from highly accessible bluegrass tunes to extreme arrangements of East Indian ragas. GCO’s instrumentation includes guitar, fiddle, bass and drums. The widely versatile instrumentals are accessible to music-lovers of all ages!

They are a brand new band that is already making a name for itself in the national music scene. Two of The Orchestra’s pieces were performed on A Prairie Home Companion in November of 2008!

The Galactic Cowboy Orchestra’s first album, “Lookin’ for a Little Strange,” was released in November, 2009.  “All Out of Peaches” came out in 2011, and a concert DVD “Live at the Paramount” is now available.