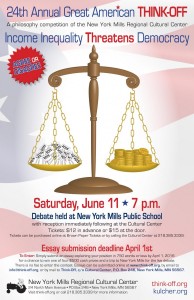 The Cultural Center in New York Mills proudly announces the four finalists for the 2016 Great American Think-Off! These four individuals will travel to New York Mills this June to go head-to-head in three rounds of debate to settle the issue: Income Inequality Threatens Democracy. Join us on

for the great debate.

All the essay entries were read, re-read, and judged by our panel, resulting in the following four finalists (in alphabetical order): Sam Dennison from San Francisco, CA; Kim Larson from Moorhead, MN; Alex Liuzzi from St. Paul, MN; and Alice Obrecht from Wheaton, IL (currently residing in London).

Representing the position that income inequality DOES NOT threaten democracy are Kim Larson, a writer; and Alex Liuzzi, a Teacher Education Specialist for the Minnesota Board of Teaching.

Representing the position that income inequality DOES threaten democracy are Alice Obrect, a researcher (humanitarian aid) and Sam Dennison, a former educator who is now employed by Faithful Fools, a non-profit dedicated to building community through art, education, advocacy and healing.

Now in its 24th year, The Great American Think-Off is an exhibition of civil disagreement between powerful ideas being explored by every day people. Designed to bring philosophy down from the ivory towers of academia and make it accessible for all, the contest has received national acclaim including coverage by C-SPAN, the New York Times, and The Today Show.

The debate will be held in the James Mann Center for the Performing Arts at the New York Mills School on Saturday, June 11th, 2016 at 7pm. Tickets are $12 in advance or $15 at the door and can be purchased in advance online at Brown Paper Tickets (click here) or by calling the Cultural Center at (218) 385-3339.