CLIMB Theatre, an award winning and nationally recognized company, is collecting stories as part of the Humans of Minnesota Project. To gather stories for this project, professional theatre artists will be leading community dialogue and story sharing workshops. Artists will also record one-on-one interviews. After their visit to each town, professional playwrights will use the shared stories to write a new play specifically about our region! After a few weeks, CLIMB Theatre will return to perform this new play for the entire community, and the performance will be featured as part of the Humans of Minnesota podcast series.

CLIMB Theatre will be in New York Mills to perform their Humans of Minnesota play about Otter Tail County & the lakes region on Friday, April 28, 2017! Join the Cultural Center at this one-of-a-kind performance supported by the Minnesota State Arts Board.

Climb Theatre of Minneapolis, in conjunction with the Cultural Center in New York Mills, presents a Humans of Minnesota play on Friday, April 28 at 7:30 p.m.

Humans of Minnesota is a project supported by a grant from the Minnesota Arts Board whereby actor educators go out into towns in rural Minnesota to collect some oral traditions, legends, and stories to be made into performance pieces highlighting what it is like to be a human of Minnesota. Interviews are conducted, impromptu story-collection in public spaces is done, and formal storytelling workshops are given. 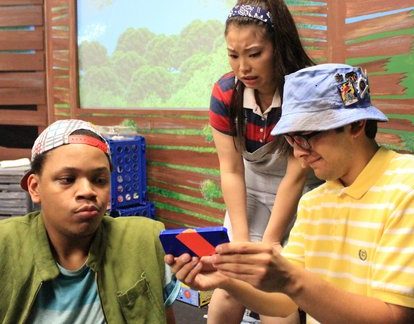 This performance is based on stories collected by the playwrights and actors of Climb Theatre while visiting the heart of the lakes area over a period of two weeks in March of 2017. The interviews taken with local residents are then combined and transformed into a theatre piece which highlights life in Otter Tail County.

Climb Theatre is a Minneapolis-based education and outreach organization whose mission it is to create and perform plays, classes, and other creative works that inspire and propel people–especially young people–toward actions that benefit themselves, each other, and the community. Climb is solely a touring theatre company so all performances happen at schools, camps, offices, and centers–wherever people are. Climb reaches an average of 623 audience members every day.

The primary performance of this story montage is held at the Cultural Center. The public is encouraged to watch for information about the upcoming follow-up performance (summer or fall 2017). This original play is one of four written around the state and is supported statewide by a Minnesota State Arts Board Arts Tour grant, and locally by the New York Mills Friends for Good, a local group dedicated to paying it forward for the good of the community.

Light refreshments are served gratis.  Tickets are $15 at the door, $12 in advance, $5 for students, and members of the Center get $2 off those prices. Call or stop by to purchase advance tickets. Admission proceeds support Cultural Center programs.