The Cultural Center is pleased to present in the main floor gallery in March 2016 an art exhibition and conversation exploring women’s identity and culture through the work of two artists: Norwegian-American artist and musician Arna Rennan from Duluth explores concepts of landscape and other metaphors for immigration and integration; Iranian-American artist Leila Rastegar from Fargo explores the inner and outer worlds of women in her circle of family and friends, including what is retained and what is lost through immigration. 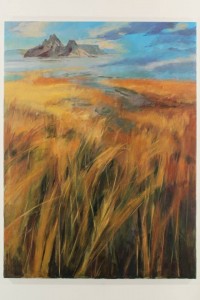 Arna Rennan spent 13 consecutive years studying art and working within the artists’ community in Oslo, Norway. Upon returning to her native Minnesota, she began painting the landscape of her environment as a means to reconnect. The years were filled with images and memories of Norway, which she is now venturing to express in her paintings. Just as an immigrant begins blending languages while speaking with an accent, Arna is overlapping prairie with the mountains of Norway along with other culturally iconic images. The theme of her new work is Immigration – Integration. It is her specific story and experience, but she hopes that others can relate to the overlap of cultures in their own way in our land of diversity.

In addition to working with visual art, Arna is also an accomplished singer and musician of traditional Norwegian folk music. She first learned from her parents who emigrated from Norway to Minnesota in the 1950s, and later through her years of living in Norway and enjoying the thriving folk music culture in Lom, where she worked during the summers. In 2000 – 2001 Arna studied vocal folk music at the Institute for Folk Culture located in Rauland, Telemark. There she was mentored by some of the finest folk singers while also going in depth into the cultural context and history of folk music.

Arna’s work is part of both public and private collections both in Norway and Minnesota. She has received numerous grants for travel and study as well as artist residencies. 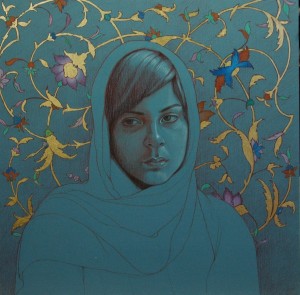 Leila Rastegar is an Iranian-born artist. From her childhood she was pursuing her dreams to become a professional artist, but due to the situation of her life, Leila received a BS in Computer Engineering from Shiraz University in Iran in 1988. Rastegar, however, attended private Art School to keep her passion for art alive.

In August 2001, she immigrated to United States with her family, and her dreams begin to become reality. She attended North Dakota State University, where she assisted in the gallery operation at the Memorial Union Gallery. She got her MFA in painting and drawing at the University of North Dakota in May 2011. She has exhibited her work extensively in  the Fargo/Moorhead area. She is, currently, a full time artist.

Her style is representational with direct, painterly approach. Her most recent project encompasses a series of landscape of Minnesota and North Dakota to capture the soul of the environment of her current place of residence.

Leila’s artwork explores the complex identities of women in Iran. It is based on her experience as an Iranian woman living in the United States. She seeks to describe the experience of women of her culture with a western perspective.

The series of portraits featured in this gallery exhibit are of her family members. They may appear oriental with the veil and decor, but there is more depth than just their outer appearance. In the blue series, the women are surrounded by ornament yet isolated from it; they themselves are neither colorful nor adorning ornament.

Cultural Center Gallery hours are Wednesdays and Thursdays 10am-7pm, Fridays 10am-5pm, and Saturdays 10am-3pm. Admission is free and open to all.

Join us on Friday, April 1st at 7:30 pm for “Conversations & Concert” — an event celebrating this exhibit, featuring poetry, a talk about global women’s equality, and traditional Norwegian music (free & open to all). Click here for all the details.