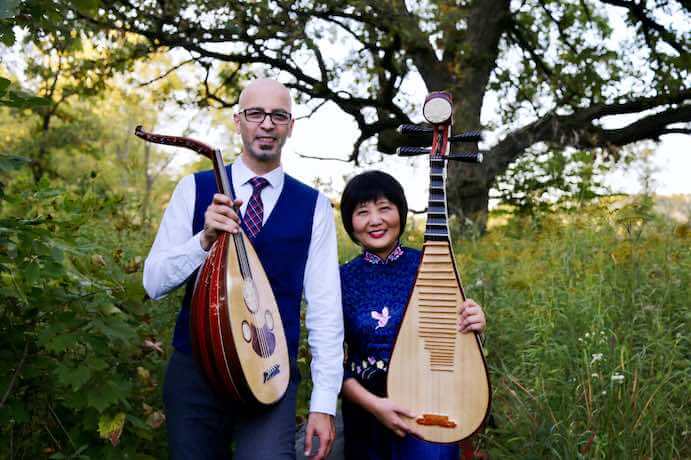 Join us at the Cultural Center for live world music by renowned musicians Issam Rafea and Gao Hong.  This concert is an “adapted in-person event” which will follow COVID guidelines for safety.  Limited tickets available.  please call 218-385-3339 to reserve your spot.

Since they never discuss what they will play in advance, no two performances are ever the same. Each concert is a once-in-a-lifetime experience, and audiences witness singular creations that come to life before their very eyes and ears – but are never to be repeated.

Tickets will be sold in groups to accommodate the largest number of people safely.  Purchase limited numbers of tickets at tables of 2, 3, or 4 people each, with drinks and snacks included, or purchase a limited number of single tickets.  Click below to purchase tickets online.  Call 218-385-3339 with questions.

Response from their recent performances at the Smithsonian Institution in Washington, D.C., include:

“You’ve changed my life, opened my heart and spirit!”

“I really was impressed to feel, listen and watch you two creating something sublime, full of joy and in a profound way, capable of awakening the audience spiritually. I don’t think I’m alone in feeling like your music allowed all of us to transcend ourselves and be exceptionally present in those moments of creation.”

“…you two move Kandinsky’s spiritual pyramid upwards…which is the true purpose of all art and artists.”

In May of 2018 they released their debut album, Life As Is – the Blending of Ancient Souls from Syria and China. It made the first ballot for the 2019 Grammy Awards and was nominated for Best Instrumental Album and Best World Beat Album in the 2019 Independent Music Awards. It has been broadcast worldwide and appeared on
numerous “top pick” lists including the #5 classical pick on Spotify for the week it was released.

Their new album, From Our World to Yours, was released worldwide on April 24, 2020 by ARC Music International in the U.K. ARC Music is the number 2 world music label in the world and has been a leading record label and publisher in the field of world and folk music since 1976. The album has already made the first ballot for the 2021 Grammy Awards and received 2 Gold Medals – Album and Instrumentals – from the 2020 Global Music Awards. It has been described as “Dreamy, contemplative music together with fiery, passionate pieces, ranging from a traditional feel to avant-garde. 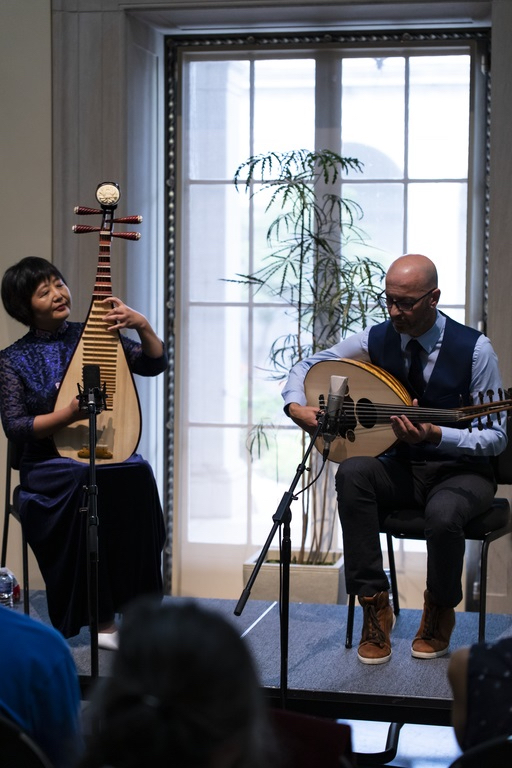 An inspired and inspiring meeting of two musical geniuses from two very diverse cultures: Gao Hong (Chinese pipa master) and Issam Rafea (Syrian master of the Middle Eastern oud) present a purely improvised set recorded live in Kracum Performance Hall, Carleton College in Northfield, Minnesota. Via China and Syria, From Our World to Yours is a true connection of cultures through music.”

The Duo has traveled throughout the U.S. thrilling audiences wherever they performed. They performed at the Smithsonian Institution, Lotus Festival (Bloomington, IN), Trinity Center for Urban Life in Philadelphia (for Al-Bustan Seeds of Culture), Music in the Chapel Concert Series (Minneapolis), the University of Maryland; Carleton College; St. Olaf College; St Paul College; The Cedar Cultural Center; Inn-Fest; Macalester College
and dozens of other performances throughout Minnesota. They were interviewed and featured on the MPR/NPR radio program All Things Considered; and on WCCO/CBS Radio’ s Steele Talkin’ with host Jearlyn Steele.

During their performances at the Lotus Music Festival they saw their audience grow exponentially from concert to concert.  Many who attended their first concert made it a point to attend all three of their events and brought others along with them. And each event ended with a standing ovation.

Learn more about the artists!

Please help us stay healthy and open for business by following COVID safety guidelines, which will be observed at this event, including spacing, masks, plexiglass screens, and limited number of attendees. If you are not well, please do not attend. We are hoping to offer a virtual option; more information to come on www.kulcher.org.  Please contact us with any questions at 218-385-3339.

We are grateful for the support of all of our sponsors, donors, and members.