Meet John House on Friday, July 11 from 2-5 pm at his reception 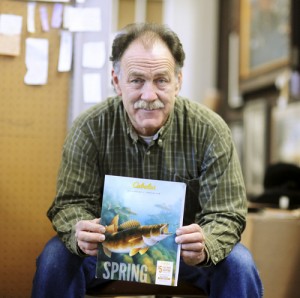 Renowned artist John House will fill the Cultural Center gallery with portraits of human nature and wild nature as part of the annual fish decoy show at the Cultural Center this summer.  This show is held each year in conjunction with the LundMania Fishing Tournament and the New York Mills Summer Celebration.

Born in 1956 in St. Paul, Minnesota, John showed both artistic talent and a love for nature at a very early age. John’s passion for fur, fin and feather overshadowed his artistic pursuits in high school, but the unpleasantness of an accounting major in college forced him to rethink the direction his life was taking.  John has been recognized as one of the foremost wildlife artists in the United States, having won competitions for his work to be placed on Minnesota’s duck, walleye, trout, turkey, and pheasant stamps.  John’s art graces the cover of the 2014 Cabela’s Catalog.

After a short stint as a fishing guide in Canada, John married his high school sweetheart and took up knife and chisel, deciding that he was a professional decoy carver after having carved the grand total of one decoy. It was difficult at first, but drawing from his years of duck hunting experience, eventually his talent came through and the public began to take notice. In 1985 he entered his first carving contest and won first place with Canvasbacks. Three more national contests followed, all with blue ribbons, culminating in his first win at the Ward World Championships in 1992. All of these contests were won with Canvasbacks, the grandest duck God ever made. To date, John has hand-carved and sold over 500 decoys.

However, as a carver in the mid-‘80’s, John’s first passion of drawing and painting returned to him, and slowly he began to blend flat art into his repertoire, depicting the many dramatic scenes he’s experienced as a duck hunter. Again, it was a slow start, but his carving background gave him the foundation he needed to portray birds in sporting situations, and eventually the public began to respond. In time, John began to enter painting contests sponsored by the Minnesota DNR (known as “Stamp contests”), and finally won the Minnesota Duck Stamp contest for 1999, followed by the Pheasant Stamp for ’04, theTrout Stamp for ’06 and the Turkey Stamp for ’08. With this last win, John became the first and only artist to win all four of Minnesota’s Stamp contests, the “Minnesota Grand Slam”, a significant and gratifying win for him, something he has wanted for a long time. In addition, he has illustrated three books and has been on Field and Stream Radio and ESPN Outdoors.com

John has been a full-time, professional artist for over 30 years now, being largely self-taught with the exception of a year of training at The Atelier in St. Paul, Mn. in 1997. He and his wife Barbara live in the tiny town of Melby, Minnesota on 80 acres where they enjoy the outdoors with their four children.