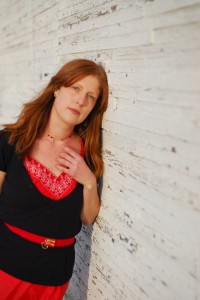 Leslie Merrill is our Arts Retreat visiting artist for two weeks in June. She is a Denver-based choreographer, performer, video artist, and movement educator. During her residency, Leslie will be working on her upcoming interdisciplinary performance work, The 13th and Final Principle, to be performed by a cast of nine dancers in September, 2013. She will also be teaching an adult dance class, free and open to all, in the Cultural Center upstairs dance studio on Thursday, June 20th from 10:00 – 11:15 a.m.  You are sure to work up a sweat as you jump, soar, stretch, and turn your way through the studio in this fun, upbeat jazz dance class, which will take place in a welcoming, non-competitive environment! Call the Center to register (218-385-3339), or just show up on Thursday morning.

Leslie holds a Master of Fine Arts in Dance Choreography and Performance from the University of Colorado, where she pursued secondary emphases in Interdisciplinary Performance and Dance for the Camera.  She has been teaching dancers of all ages and skill levels for 16 years in a range of dance forms, and is currently an instructor at the Cleo Parker Robinson Dance School, Mountain Kids, and Studio D Academy of Dance.   Leslie also works as Affiliate Faculty at Metro State University of Denver, where she is currently in the process of co-creating the curriculum for a new dance major.

Leslie has enjoyed performing professionally with Haan Dances, Move On Dance Company, Bound Life and Chaos Creations, Poor Richard Dance, and dancing and choreographing for Interweave Dance Theatre. She currently performs with the Cindy Brandle Dance Company and Louder than Words Dancetheatre, and works as a choreographer, dancer, and video artist for Ascential Dance Theatre Colorado. Leslie co-founded the Boulder-based, Peekaboo Sole Productions (PSP) with Mimi Ferrie and Jessica England in 2009.  PSP produces the work of emerging and established choreographers in Front Range Colorado, and facilitates collaborative exchange amongst dance artists and their communities.

Leslie has been commissioned by several choreographers to collaborate in the creation of dance films, including Cindy Brandle, Mary Wohl Haan, and Meredith Black, in addition to producing her own video work. Her work has been shown nationally as part of the American Dance Festival’s Dancing for the Camera Series, the TARLA Dance for Camera Festival, the Holland Project, and the Intangible Bodies Conference. Internationally, Leslie’s work has been presented in British Columbia as part of the Collision Symposium on Interarts Practices
and on tour with the Sans Souci Festival of Dance Cinema in Mexico and Germany. Leslie also works for the Colorado Dance Alliance as a writer, editor, and website manager.  She has enjoyed sharing her research in conference presentations and publications and has been fortunate to receive a variety of grants for her creative scholarship.