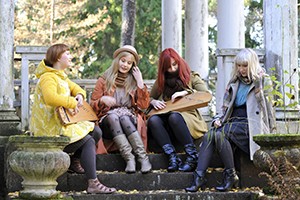 The Cultural Center is pleased to host Finnish folk group Kardemimmit on Tuesday, September 15th at 7:30 p.m., during the group’s USA tour.

Kardemimmit is a Finnish folk music group formed by four young women: Maija Pokela, Jutta Rahmel, Anna Wegelius and Leeni Wegelius. They are singers and players of the kantele (the national instrument of Finland) in its 15 and 38 stringed forms. The group’s repertory consists of modern folk music mostly composed by the members themselves. The music of Kardemimmit is fresh but it’s strongly foundationed in Finnish tradition from both Eastern and Western regions featuring e.g. reki-style of singing, Perhonjoki valley kantele style, Karelian small kantele and runo-song traditions as well as archaic improvisation. 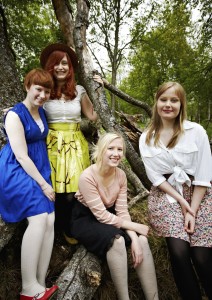 The group’s roots go back to the music school Juvenalia in Espoo, southern Finland where all of the members have studied. Kardemimmit has played together for over ten years. This long history can be heard as a unique sound in both the group’s singing and playing. As a kantele group Kardemimmit is a foregoer: in the year 2004 the Kantele Association chose the group as the kantele group of the year and the next year it won the national kantele group contest in its league. Kardemimmit was the group of the year in the Uusimaa-region in 2009 and 2010. Their third album, Autio huvila, was chosen as the Folk Music Album of the Year 2012 by the Finnish Folk Music Association.

Thanks to Finn Creek Museum for co-sponsoring this concert with the Cultural Center. Finn Creek is celebrating 40 years of open air history this year, and we are pleased to partner with them to bring this Finnish folk music to New York Mills and the surrounding region, direct from Finland. Please join us on Tuesday, September 15th at 7:30 p.m. Tickets are just $5.