Michael Johnson will give a holiday concert at the Cultural Center on Friday, November 30th at 7:30pm.  Admission is $12 advance reservation or $15 the night of the concert.  Members receive a $2 discount and anyone gets a dollar off by bringing a donation for the NY Mills Food Shelf.  Student admission is $5.  Click the images to visit Michael’s website. 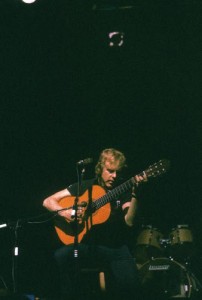 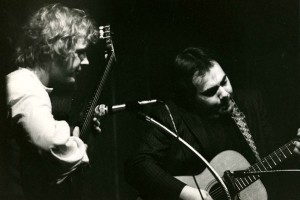 Someone asked, “Is he the real Michael Johnson?” The answer is an unequivocal “yes!”

His name is Michael Johnson. He has no plans to put on a cowboy hat, affect an accent, wear one glove or be anyone but himself. Moreover, he is “The” Michael Johnson, and he has performed and lived more music and recorded more hits than you would imagine.

His voice immediately identifies him as the man who sings “Bluer Than Blue”, “Give Me Wings”, “That’s That”, “This Night Won’t Last Forever” and other landmark songs. His music shows a diversity, depth and heart that only come from years of dedication to a labor of love.

When asked what he would have you know about himself, Michael says: “Tell them that I love it.” He started playing at age thirteen and just never quit. Singing, playing, writing and recording are the only things he’s ever done and he loves it.

“Tell them I play guitar.” He really plays guitar. He studied in Barcelona and he plays on all his records with a unique and distinctive style. His playing is an important part of his show.

“I am a soloist at heart.” Michael often performs alone, and he has elevated the art. He prefers the intimacy and spontaneity of a show that can change with the moment.

“Tell them I’m a showman. I like to talk to people and I love to make them laugh. And, of course, I have to move them with the music. That’s the whole thing. Without that, there is no reason to be on stage.”

What one remembers of Michael is the texture of his voice, the meaning of the lyric and the music of the guitar – singer, song and sound. And the feeling of being at home with a friend.  Here is a YouTube video of Michael singing his well known song “Bluer than Blue.”