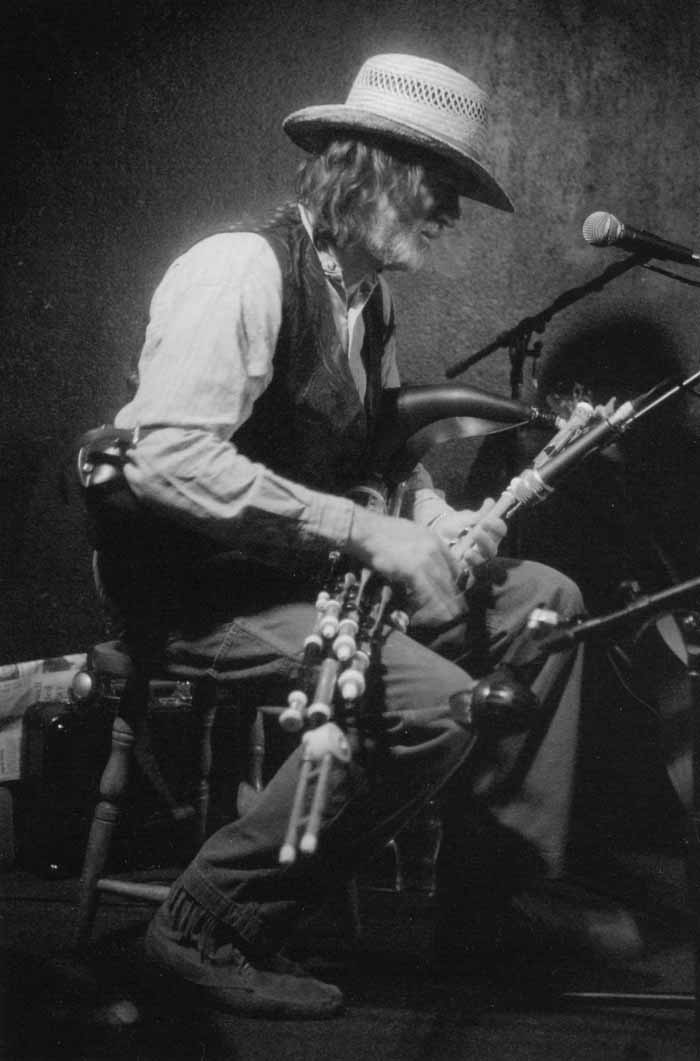 Enjoy a musical odyssey to Old Ireland with the Paddy Keenan Concert Saturday, November 17th in New York Mills at the Cultural Center.  Mr. Keenan plays the uilleann pipes, the Irish bellows-blown bagpipes.  This is one of the oldest of Irish musical instruments, and it is quite different from the Scottish Highland Pipes which are mouth blown and meant as an outdoor instrument.  Paddy will be performing with Celtic guitarist Eugene Durkee.  Tickets are available at the Center or by calling 218-385-3339.  Admission is $12 advance sale and $15 the night of the concert.  Students pay $5, and members get $2 off ticket price.  Bring a donation of food for the Mills Food Shelf and get an extra $1 off the admission.

Paddy Keenan was born in Trim, Co. Meath, to John Keenan, Sr. of Westmeath and the former Mary Bravender of Co. Cavan. The Keenans were a Travelling family steeped in traditional music; both Paddy’s father and grandfather were uilleann pipers. Paddy himself took up the pipes at the age of ten, playing his first major concert at the Gaiety Theatre, Dublin, when he was 14. He later played with the rest of his family in a group called The Pavees.

At 17, having fallen in love with the blues, Paddy left Ireland for England and Europe, where he played blues and rock. Returning to Ireland after a few years, he began playing around Dublin with singer/keyboardist Triona Ni Dhomhnaill and singer/guitarist Micheal O Dhomhnaill. Fiddler Paddy Glackin then joined the three, and they asked flute player Matt Mollov to play with them shortly thereafter. Next accordion player Tony MacMahon joined the group, and then guitarist Donal Lunny was asked to listen to the six. Liking what he heard, he joined as well, and the loosely-knit band began calling itself “Seachtar,” the Irish word for “seven.”

Seachtar’s first major concert was in Dublin. They played a few more gigs around the country, but circumstances soon forced Tony MacMahon to drop out. When the rest of the band decided to turn professional Paddy Glackin left as well; he was replaced by Donegal fiddler Tommy Peoples who was later replaced by fiddler Kevin Burke). All the group needed now was a name.

Micheal O’ Dhomhnaill had recently returned from Scotland, where he happened across a photograph taken in the 1890s of a group of tattered musicians. “The Bothy Band,” it was titled, in reference to the migrant Irish laborers who worked in England and Scotland and were housed in stone huts known as “bothies.” Micheal suggested that the band take this name, and the others agreed. Thus was born one of the most influential bands of the 1970s, The Bothy Band.

The Bothy Band forever changed the face of Irish traditional music, merging a driving rhythm section with traditional Irish tunes in ways that had never been heard before. Those fortunate enough to have seen the band live have never forgotten the impression they made — one reviewer likened the experience to “being in a jet when it suddenly whipped into full throttle along the runway.” Paddy was one of the band’s founding members, and his virtuosity on the pipes combined with the ferocity of his playing made him, in the opinion of many, its driving force. Bothy Band-mate Donal Lunny once described Paddy as “the Jimi Hendrix of the pipes”; more recently, due to his genius for improvisation and counter-melody, he has been compared to jazz great John Coltrane.

Paddy’s flowing, open-fingered style of playing can be traced directly from the style of such great Travelling pipers as Johnny Doran; both Paddy’s father and grandfather played in the same style. Although often compared to Doran, Paddy was 19 or 20 when he first heard a tape of Doran’s playing; his own style is a direct result of his father’s tutelage and influence.

Here’s what critics have said of late:

“Paddy Keenan returned to Celtic Connections and presided over one of the most white-hot, most gloriously musical displays in, never mind the festival’s, but, one suspects, the Royal Concert Hall itself’s history.”   Rob Adams – Glasgow Herald

“Keenan’s wild and free style of piping is at its unfettered best. With a front man like Keenan and a cast of musicians as distinguished as this, it’s not surprising that this disk rocks.” – Steve Winick – Dirty Linen

“Paddy Keenan has consistently been one of the enigmas of Irish traditional music. Na Keen Affair is the first recorded evidence for 14 years that Keenan is still untouchable.” – Colin Harper – Q Magazine

“In Irish music there are legends and legends and then there’s Paddy Keenan. Paddy Keenan’s playing is now at its peak. Na Keen Affair is one hell of a comeback.” – John O’Regan – Rock’n Reel

Paddy’s style has continued to mature in the intervening years since the break-up of The Bothy Band as he has pursued a solo career. Recently he has played at several festivals and weekends, including Gaelic Roots I and II at Boston College; the 1995 Eigse na Laoi at University College, Cork; Green Linnet’s Irish Music Party of the Year; and twice at the Washington Irish Folk Festival at Wolf Trap, including a concert performance there in 1995 with accordion player James Keane and guitarist John Doyle which was videotaped and has been broadcast worldwide. He has played the Stonehill College Festival in Boston and the Philadelphia Ceili Group’s Irish Music and Dance Festival, as well as various concerts, benefits and tionals (piping festivals) around the US, in Canada and in Ireland, and even plays an occasional ceili (dance).

Paddy has a new album, “Na Keen Affair,” on Hot Conya Records. He also has composed and arranged two pieces for the soundtrack of  “Traveler,” ( http://www.jrnl.com/news/97/May/jrn49020597.html ), a new film by and starring Bill Paxton and Marky Mark. He also recorded recently with fiddler James Kelly.

Generally acknowledged as the most accomplished uilleann piper performing today, Paddy is certainly one of the most brilliant musicians of his generation. He can rightfully claim his place alongside such open-style legends as pipers John Cash and Johnny Doran.