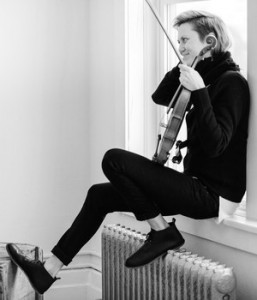 LAATIKKO/BOX explores the emotional terrain we encounter when we step into unknown worlds. Pajunen combines the reading of archival material, recorded audio interviews with recent immigrants, live violin, voice, and electronic technology to create a poignant interactive sound piece. Laatikko/Box is a search for commonalities: between distant immigrant stories, and between the immigrant journey and our own journeys of change. Haven’t we all left one ‘home’ for another?

In 2014, Laatikko/Box was commissioned by the Cedar Cultural Center in Minneapolis. Inspired by Pajunen’s research in the Finnish-American archives, Laatikko/Box is a work in stages that follows the personal and musical migration of the artist. Rather than an expected response to the archival material, Pajunen found the immigrant stories mimicked her personal journey of leaving a place of familiarity, a way of being.

Sara Pajunen is a Minnesota-based musician. After receiving classical music degrees (violin) in both Minneapolis and Helsinki, she founded three touring ensembles based on her Finnish heritage. Her current duo Aallotar explores the similarities and differences of cultures grown apart and in her solo work she melds audio interviews, concept, and acoustic and electronic music into live sound presentations. Her music has received grants from Minnesota State Arts Board and Koneen Säätiö and she is Finlandia Foundation’s 2015-16 Performer of the Year.
The performance will take place December 11 at 7:30 pm.
Suggested donation of $5-10.