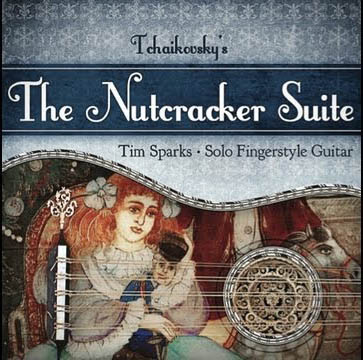 Join Tim as he plays one of his signature pieces at the Cultural Center at 7:30 pm. Admission is $12 advance reservation or $15 at the door. Student admission is $5 any time. Tickets may be reserved by calling the Center at 218-385-3339.

When Tim Sparks won the National Fingerstyle Guitar Championship with his amazing solo guitar rendition of Tchaikovsky’s Nutcracker Suite in 1993, the critics heralded it as a significant contribution to the existing body of guitar literature. For Sparks, it was the natural evolution in a musical journey dedicated to the adaptation of all forms of music to the guitar. Sparks brings all of the charm of The Nutcracker Suite to the solo guitar in his unique and wonderful rendition.

Tim Sparks is an award-winning guitarist whose blending of musical styles has won him extensive praise from all corners of the music world. Guitar Player Magazine has called his music “Fresh, exotic, and totally cool.”, Acoustic Guitar Magazine calls it “rich and sensuous”, and guitarist Leo Kottke simply says “He’s really one of the best musicians I know.” From the early traditional country blues and gospel music he learned in the Blue Ridge Mountains to the Jazz, Be Bop, classical and world music from his varied career across the U. S. and Europe, Tim has thrilled and inspired audiences and musicians world-wide.