The New Nordic Art Show aims to integrate the artwork of numerous regional artists into the realm of “new classics,” work conceived in the belly of the mother country but birthed in the art world of today. 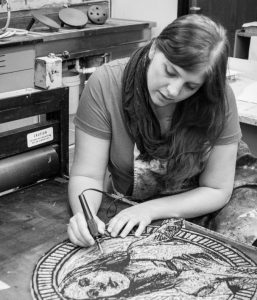 Elisa Forer is a printmaker from Fergus Falls, MN who now resides in Chicago.

Forer received her Bachelor of Fine Arts at Minnesota State University Moorhead.  Upon moving to Chicago, she became a teaching artist at Spudnik Press and serves as the lead of Pre Press for Paper Source.

Forer’s work has been shown nationally, and she is an Artist-in-Residence at the Plains Art Museum this month. Her work often focuses on iconography from her Nordic heritage and political commentary, most commonly environmental issues. Of her new-found oeuvre, showcasing dala horses or kubitsmaling, Forer says, “Returning to a symbol I cherished, researching it’s history, and spending time with it by working out new patterns and forms brought around a fertile desire to continue to make new work of my own.”

Check out her blog: eliseforer.com

Shown in addition to Forer’s printmaking are other Nordic-inspired works by mesh and fiber artist Kristi Kuder. 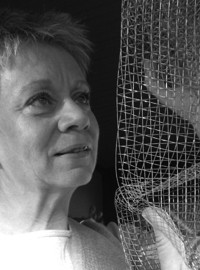 Originally from Breckenridge, MN and now living in Minneapolis, Kuder has this to say of her objet d’art, “Wire mesh has a unique quality of both reflecting and filtering light which creates an illusive presence about the vessels and sculptures I create.”

She grew up in western Minnesota in the Red River Valley where the horizon stretches in all directions under an expansive sky. Distance is deceptive and space is limitless. Headlights from a distance may belong to a motorbike a half mile up the road or a semi five miles away. No curves, hills or valleys break the steady beam of light traveling through space. A silhouette on the horizon may be a solitary person, a cluster of grain elevators or simply a mirage. Few trees or buildings offer reference. Kuder has long been fascinated by the unreadable aspect of this region and finds working with wire mesh helps express that.

Although currently living in Minneapolis, Kuder is still connected by deep roots to the west-central part of the state. Farming advancements and global demands on the farmer to produce greater yields are threatening the natural habitat in that part of the state. Agricultural practices such as monoculture plantings, the removal of fence rows and buffer strips, the use of hybrid seeds and chemical fertilizers are drastically reducing the number of plants available to support this area’s natural wildlife. As rural communities expand, sprawling housing and commercial developments are filling in “undeveloped” wetlands and and mowing over grassland critical to the support of hundreds of native plant and animal species. These issues are the impetus behind Kuder’s current body of work.

See some of Kristi’s work at: kskuder.com 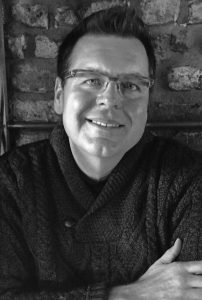 Strand’s work often scrutinizes the function of art and craft in contemporary society. As Professor of Art and Head of Visual Arts at North Dakota State University in Fargo, he lectures in institutions  ranging from the Smithsonian American Art Museum to The Model in Ireland to multiple universities in Brazil. In May, Strand opened a solo show in Taipei, Taiwan and his criticism is published internationally.

Strand develops projects that create bridges of communication that are enabled by the common use and/or distribution of hand-thrown ceramic cups made in his studio. These projects then seek to develop a specific history for the objects involved through experiments in conceptual function.  Michael straddles a line between journalist, social-scientist, activist and potter.

Light refreshments served. Free to attend and open to all. 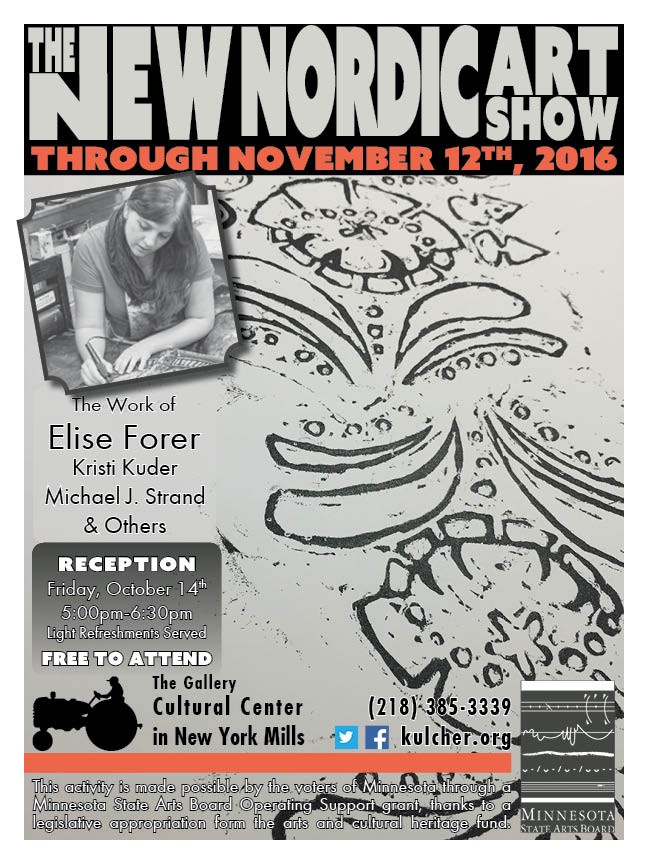 The Gallery at the Cultural Center is open Wednesday & Thursday 10am-7pm, Friday 10am-5pm, and Saturday 10am-3pm. The Gallery is closed Sunday-Tuesday.