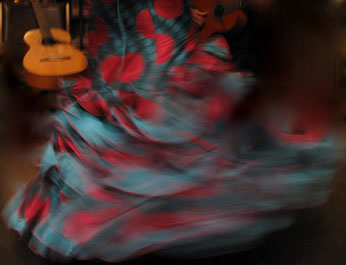 “Las Flamencas” unravels the iconic appeal of flamenco women and their legendary art form. Join this journey in and out of satire, sorrow and celebration, inspired by the power, vulnerability, and strong self-identity of the flamenco female, past and present. With special guest, flamenco singer Vicente Griego, and guitarist Trevor May.

Dancer/Director Deborah Elias was originally a classical musician, but fell in love with flamenco and has devoted herself to dancing ever since. As Deborah Elias Danza Española, her works have included flamenco theater pieces Palabras al viento (2011), The Moon’s Desire (2010), and Tia (2007), as well as a show of traditional flamenco, Flamenco Pure & Strong (2011), which toured to 13 cities across Minnesota. She has studied intensively with Susana di Palma, which has evolved into a strong and lasting artistic partnership, and has appeared in over 20 productions of di Palma’s company Zorongo Flamenco Dance Theatre. Ms. Elias is a dedicated educator, conducting residencies and workshops in K-12 schools through COMPAS and the Minnesota State Arts Board’s Roster of Teaching Artists. She has been recognized with awards from the Jerome Foundation, the Minnesota State Arts Board, and the Metropolitan Regional Arts Council.

Guest Guitarist Gabriel Osuna, born to a family of artists and musicians in New Mexico, began singing hymns and laments as a child in his mountain village. He later pursued the study and performance of flamenco guitar in Spain and abroad. Chuscales, El Viejin, Pedro Cuadra, Ramon Jimenez, Rafael Habichuela, El Entri, Juan Maya Marote, David Marin and Miguel Angel Cortez are some of his most influential mentors. He has collaborated on numerous studio recordings and is featured on Dezeo, a Ladino album by Consuelo Luz. He has performed at the “World Expo” in Hannover, Germany, and at the “Saint-Florent-le-Vieil Les Orientales” Festival in France. Osuna has presented his music in theaters and in “Tablaos” (small flamenco cabarets) including a season at the gypsy caves in Granada. Currently Gabriel resides and performs in the Los Angeles area with the musical group “Encuentro”.

Guitarist Trevor May began his studies of flamenco in Sevilla, Spain right out of high school. For over ten years he has been playing around the Midwest, most notably with Zorongo Flamenco in the Twin Cities. Studying at the Fundacion de Arte Flamenco Cristina Heeren gave Trevor a pure foundation of flamenco accompaniment for singing and dance. This passion has provided him the opportunity to play for many world-class flamenco artists such as the esteemed dancer Manolete. Trevor now plays with a variety of artists to keep the tradition of flamenco alive for all audiences.

This project was funded in part or in whole with money from Minnesota’s Arts and Cultural Heritage fund.  This free performance is sponsored by Viking Library System and the Cultural Center.

Don’t miss the opportunity to see and hear this multidisciplinary cultural experience at 7:30 pm on November 22nd.