Does technology free us or trap us? 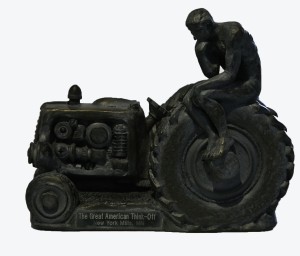 NEW YORK MILLS, Minn. – The 2015 Great American Think-Off has released the philosophy question for its 23rd annual essay competition. Individuals nationwide are invited to participate in the national debate by submitting a well-crafted essay arguing their position on the question “Does technology free us or trap us?”

The Great American Think-Off is an exhibition of civil disagreement between powerful ideas that connect to your life at the gut level. The Cultural Center, located in the rural farm and manufacturing town of New York Mills, sponsors this annual philosophy contest and encourages people of all ages to submit an essay of no more than 750 words for a chance to win one of four $500 cash prizes.

Last year’s contest featured essays from several hundred writers. Jennifer Nelson of Morris, Minn., won the debate and a gold medal with her argument that love motivates us to act more than fear. She based her essay and her case on her personal experience recovering from an automobile crash in 2004.

Writers should ground their essays in personal experience rather than philosophical abstraction. Four writers will be selected and invited to debate the question on Saturday, June 13, 2015 in New York Mills. Costs for winners’ travel, food, and lodging will be covered by the Cultural Center.

Essays are accepted Jan. 1 through April 1, 2015 (postmark or electronic date stamp), and can be submitted by mail (Think-Off, PO Box 246, New York Mills, Minnesota 56567), email (info@think-off.org) or by submitting online at www.think-off.org using the online submission form. There is no fee. Finalists will be notified by May 1, 2015 and the debate will be held on Saturday, June 13, 2015.