Puppet Pageant based on

tales from the Kalevala

After the Corn Feed

Dance, music, acting, costume design and performance skills are taught by Anne Sawyer-Aitch, Creative Director and Puppeteer from Minneapolis, who has 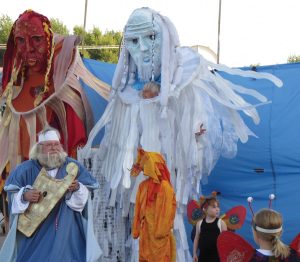 worked with In the Heart of the Beast puppet theatre in Minneapolis.  This program involves the creating and making of puppets of all sizes to be used in the 9th Annual Puppet Pageant, which is street theater play based on the Finnish national epic poem, The Kalevala.  Stilt walking is included again this year as an added element to the performance. 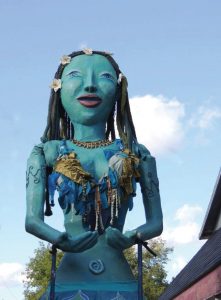 The Puppet Pageant is a wonderful opportunity for kids to gain experience in both visual and performing arts, challenge themselves physically with stilt-walking, and learn skills in collaboration and teamwork. Participants attend workshops the two weeks leading up to the 19th, which culminate in the performance after the
New York Mills city corn feed.

Actual cost to produce this event is approximately $300/participant. A portion  of this cost is funded by the Cultural Center, the City of New York Mills, NYM Civic & Commerce, Lake Region Arts Council, the McKnight Foundation, and New Horizons. To help cover the remaining costs, there is a youth tuition of $50 for this two-week program, with a $100 maximum per family. There is no fee for adults. Scholarships available based on need; call (218) 385-3339.

This activity is funded in part by a grant from the Lake Region Arts Council through a Minnesota State Legislative appropriation.

Call the center to sign up for the workshops & activities! All children who participate in the two weeks of workshops, perform in the pageant on Friday, August 19th.