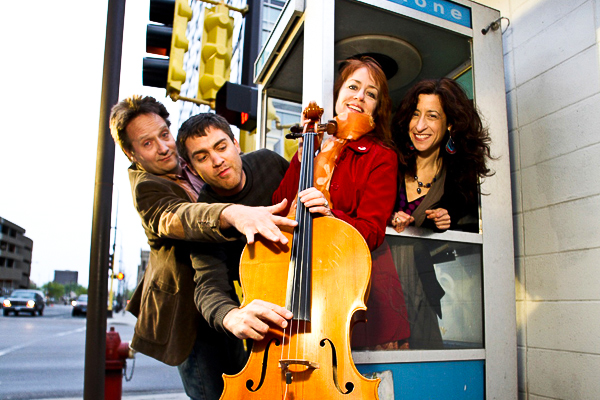 Jelloslave, the two cello, drum and tablas quartet, performs their grooving improvisational music featuring original compositions and an eclectic repertoire that takes the the audience on a journey through time and genre from Bach to Led Zeppelin and Leonard Cohen, folk music, jazz, and the music of the world.

Jelloslave, which originally formed as a duo in 2003 by cellists Jacqueline Ultan and Michelle Kinney, has since become an established quartet with the addition of drummer Greg Schutte and Gary Waryan, tablas.

Christopher Bahn from The Onion A.V. Club Blog describes Jelloslave: “Usually you’ll find the cello quietly lurking in the back of your local symphony orchestra; sometimes it’ll be brought out to provide a bit of somber coloration for a rock bands’ “serious” songs. Jelloslave instead puts the cello front and center, using the approaches of both classical and rock (but beholden to neither), whipping up a bold, avant-garde sound that also includes Indian percussion and jazz improvisation.”

Theater artist Kevin Kling has this to say: “I’m a true blue fan of Jelloslave and have worked with Jacqueline and Michelle on several theater pieces, original music and songs. It’s always a rewarding experience, unique and emotional, and takes the audience to unexpected depths. I will continue to work with them as often as possible and look forward to anything from Jelloslave”.

Jelloslave gratefully acknowledge their receipt of a 2013-14 Minnesota State Arts Board touring grant.