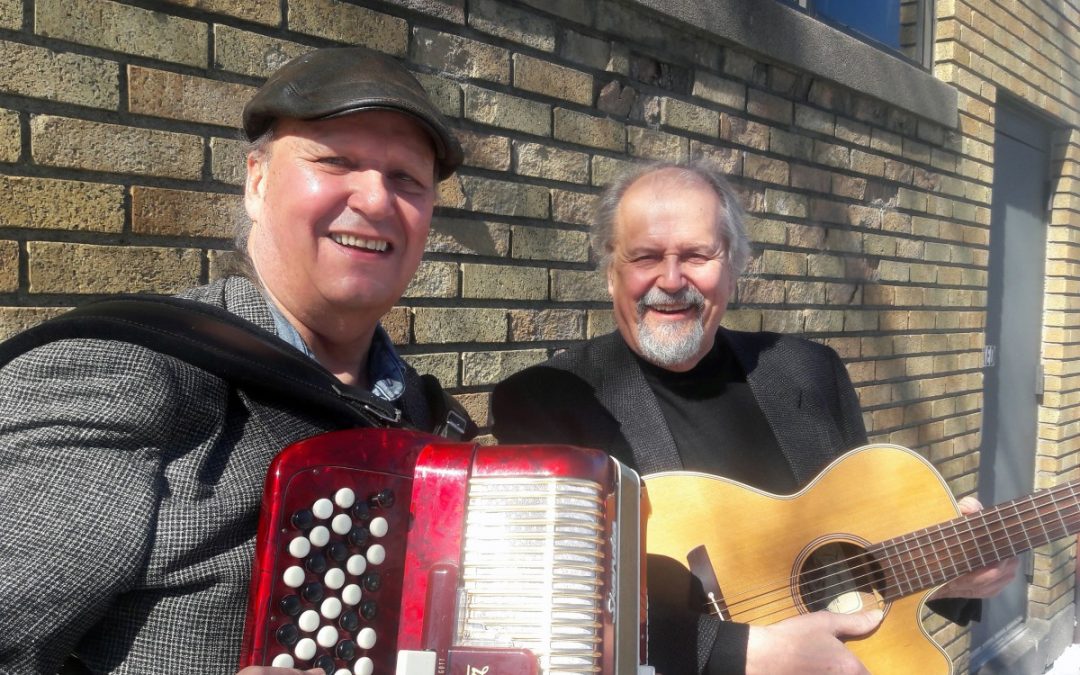 Kip and Eric Peltoniemi’s long relationship with folk, country, Finnish and Nordic music began in Wadena, Minnesota in the early 1960s when as a teenagers they began performing at county fairs, dances, and township halls…and even boxing matches. In their college years they went on to perform at folk festivals, Twin City coffeehouses and regional clubs and resorts. They soon developed a repartee and talents for mixing entertaining comedy with hot instrumentals and more serious music.

They perform both interpretations of classic and rare music as well as their acclaimed original music. As a youngster in the early 1960s, Eric learned to play his Grandma Thora’s old guitar at her farm outside New York Mills and has spent the ensuing years working multiple sides of the music industry (in New York City, Los Angeles, Chicago and the Twin Cities, as well as in Finland) as a singer, songwriter, guitarist, lyricist and composer for the music theater and film, occasional actor, and Grammy-winning record producer.

Both Eric and Kip were inspired by their culture and family heritage. Eric began adding Finnish songs to his repertoire in the 1980s and 1990s, eventually attracting the attention of members of Finland’s rich music scene. He went on to record for Finnish record labels and continues to travel and perform there to this day. In the fall of 2017 he appeared in a new Finnish film “Ikitie” (“The Eternal Road”), for which wrote and performed the theme song.

Listen to The Eternal Road Here

Eric has performed as a solo artist, with Kip, and with both American and Finnish groups. He may be best known for the award-wining music he has written for regional musical plays, including “Plain Hearts” and “Ten November.”

Like Eric, Kip started out on guitar, but the strings were so high off the neck, it was nearly unplayable. Although he eventually got a better guitar, this initial experience made him question stringed instruments as a musical outlet. When he started hearing Finnish accordion music in the Sixties, he gradually made the switch to button accordion. Over the years, he has learned to play several types of button accordions, and has even taught at Finland’s top music school, Sibelius Academy. His songs and instrumentals have been recorded by other artists and have received airplay in Europe, Australia and North America. His solo record was named “Folk Album of the Year” by Finland’s largest news.

Kip has been the subject of two documentaries on YLE, Finnish public television. He has performed mostly as a solo concert artist throughout the United States, and infuses his popular acts with tall tales and humor.

Take a peek at Kip performing at Nisswa-Stämma Festival Here

Wear PURPLE to show your St. Urho’s Day pride and get $1 off your ticket price!

Join us at the Cultural Center to experience the Peltoniemi Brothers up close & personal in our intimate, listening-room style space. What better way to spend St. Urho’s Day than listening to Finnish music, jokes and stories?? Hope to see you there!

Special thanks to our local concert sponsor, Wadena Hide & Fur!