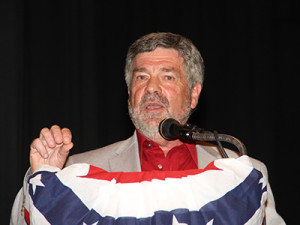 The Cultural Center in New York Mills is pleased to announce that David Lapakko of Richfield, MN, asserting that Technology Frees Us, was voted America’s Greatest Thinker on Saturday, June 13th by a crowd of 300 at the New York Mills James Mann Performing Arts Center.  David prevailed over Paul Terry, who argued that Technology Traps Us. 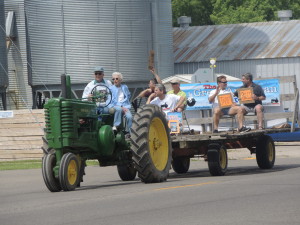 True to our Cultural Center logo, Saturday began with a tractor pulling the four finalists and our moderator down Centennial 84 Drive in New York Mills, each looking for local support for their side of the debate, holding signs stating “FREES” or “TRAPS”. Moderator John Forde struck a “Thinker” pose, and local retired farmers Bill & Delaine Meyer drove their 66-year-old John Deere tractor, sitting side by side on the single driver’s seat. 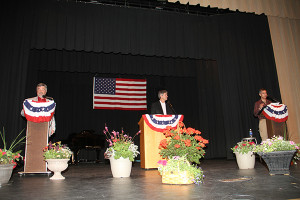 The debate began at 7:00 p.m. and opened with David Eckel and David Lapakko each presenting their argument for the stance that “Technology Frees Us”.  While both argued that technology gives us more choices and is thereby freeing, Eckel focused his arguments on the fact that people have free will to avoid the potential traps of technology, stating, “Blaming technology for our own poor decisions, even as we eagerly accept the benefits and possibilities that technology bestows, seems disingenuous. It is not technology’s responsibility to make sure that each of the vast array of choices it makes possible is in our best interests.” However, Lapakko prevailed, with a focus on the modern conveniences provided by technology, and looking beyond our computers and smart phones.

The second round of the debate featured Marsh Muirhead and Paul Terry, each arguing on the side of “Technology Traps Us”. Muirhead focused his arguments on the many ways technology harms us and our environment. He was defeated by Terry, who focused his debate on the dangers of technology including a loss of personal interaction and deep relationships, addiction, and robotics and artificial intelligence, reminding the audience that, “Cyborgs watch what we watch and log what we buy with the single aim of luring us into wanting more.” 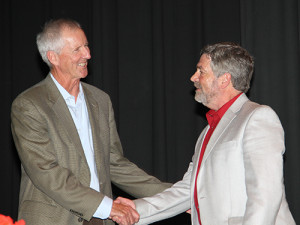 In the final round, the questions and discussion seemed to center around computers and smart phones as technology, but Lappako, an Associate Professor of Communications Studies at Augsburg College, won the support of the audience with continuous reminders that technology is much more than computers, and many of those technological advancements in the fields of medicine, transportation, electricity, and more do indeed free us to live more full and rewarding lives.

All four finalists presented relevant and interesting points in the lively debate and the audience votes showed support of all arguments.

Each of the four contestants received $500 in prize money, an expense-paid trip to New York Mills, and bronze, silver, or gold medals. When asked what keeps them coming back, all four agreed they enjoy the opportunity to engage in truly civil debate, as well as a stay in the charming town of New York Mills.  Their essays were chosen by blind selection out of hundreds of essays that were received by entrants from occupations as diverse as a carpenter, train operator, pizza artist, beer and ice delivery truck driver, community organizer, retail sales clerk, and valet, and came from as far away as Japan, Canada, and Nigeria.

Thanks to all who attended the event and made it another great year of philosophical debate in rural Minnesota.