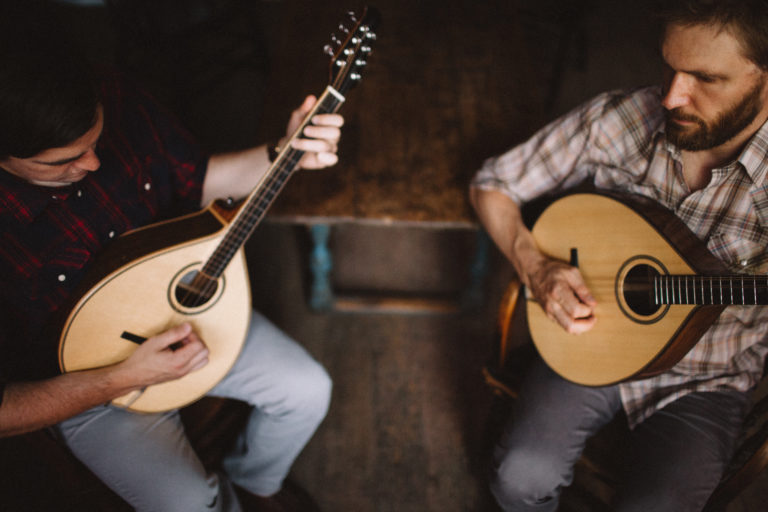 We are thrilled to present:

The Lost Forty is native to the cold Midwest winters and understands how truly grueling they can be. Add them and their love for American Irish music to your wintery mix!

The Lost Forty crafts beautiful arrangements of rare old folk songs entwined with the history of Minnesota. Their sources and their approach celebrate two centuries of Irish musical influence on the under-explored musical traditions of the north woods. Their show includes incredible archival photos, rich regional history and colorful stories.

The band consists of Brian Miller and Randy Gosa and together they mix a passion for Northwoods history and folklore with their love of arranging forgotten songs to bring to life this rich but under-explored music.

Brian Miller, a native of Bemidji, fell in love with Irish traditional music 20 years ago, moved down to the “big smoke” of St. Paul, and has since become one of the most sought-after musicians in North America’s Irish music scene. Brian provides guitar and bouzouki accompaniment for the acclaimed band Bua.

Brian’s research and revival of Irish-influenced music collected in the Great Lakes region has earned him four grants from the Minnesota State Arts Board. He was also a 2014 recipient of the Parsons Fund Award from the American Folklife Center at the Library of Congress. He promotes the revival of regional songs with The Lost Forty and through his blog Northwoods Songs where he sings, videotapes, transcribes and writes about rare traditional songs sung long ago in the white pine belt of North America.

Randy Gosa, from Wisconsin, has been playing Irish music since 1999. During his undergraduate program at the University of Wisconsin-Milwaukee, he studied with several renowned Irish music masters including Liz Carroll and Sheila Shigley, studied at the University of Limerick, Ireland with Niall Keegan and Sandra Joyce, and completed the UW-Milwaukee Celtic Studies program. A founding member of the Milwaukee based celtic trio Cé, he performs nationally with the band Myserk and collaborates with several accomplished midwest-based musicians including flute player Brett Lipshutz and celtic harpist Kim Robertson. In addition to performing, he teaches at the Irish Fest School of Music and is an active céilí/set dance musician in Milwaukee. Randy’s versatile musicianship has been described by critics such as Alex Monaghan (Folk World) as “driving, percussive, lyrical, gentle, dominant by turns.”

More About The Lost Forty

Give them a listen!

“A wonderful exploration of and oft-overlooked facet of the Irish American experience… …brilliantly curated and superbly executed.”
–Daniel Neely, The Irish Echo

“…the most fun thing at [the Milwaukee] Irish Fest this year”
— Erik Carlson, “A Feast of Irish Folk” WHPK Chicago