Even though current visiting artist Jhon Sanchez has been writing since he was a child, as an adult, the process of discovering the English language has helped him to develop his creativity. He came from Colombia in 1998, seeking asylum because the practice of his legal profession endangered his life and freedom during those years of political turmoil in his country. Learning a language at the age of 27 years old is not easy, but like falling in love, it was, and still is, wonderful to be unaware and unheeded of what would be the final destiny of the words. That’s why he started writing poetry. After going to law school in the US, and completing his masters degree in Creative writing, Jhon decided to fully dedicate his time to the profession of writing. 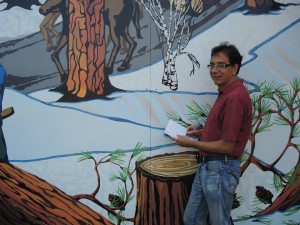 Jhon, posing by mural behind the Cultural Center, created by Pam Robinson in collaboration with local students.

Jhon lives and writes in New York City, where he is also a practicing attorney. His prose has been featured in two anthologies, New Lit Saloon and the Bronx Memoir Project. His poetry has been published in several magazines such as the Brooklyn Paramount and the Overpass Magazine. He devotes his free time to assist in the creation of a workshop called Wordsmith and he has also volunteered in creative writing classes for the HIV population in GMHC.

Sanchez was awarded the Immigrant Artist Project (NYFA 2011), and he was selected as writer fellow for the Edward Albee Foundation in 2014. During his residence time, he continued developing a Novella called the Biology for the Dove Sisters. Like most of his fiction, the Dove sisters are immigrants in the US that struggle to survive using the extravaganza of their personalities that confronts and shocks the others in their communities.

Jhon will be in residence at the Retreat House in New York Mills until September 12th. A reading and open mic reception will be held at the Cultural Center on Wednesday, September 9th at 7:30 p.m. Jhon believes that poetry and literature are tools to cause an emotional change walking through the realms of other people’s lives and difficulties. The reception will include a selected reading of his poems and narrative prose which incorporate memories, experiences and imageries from his childhood in Colombia as well as his life as an immigrant in New York City. Participants will have an opportunity to share their writings in a supportive atmosphere, following the reading. Please welcome Mr. Sanchez to New York Mills in an open, relaxed environment with a casual conversation to follow after the reading.