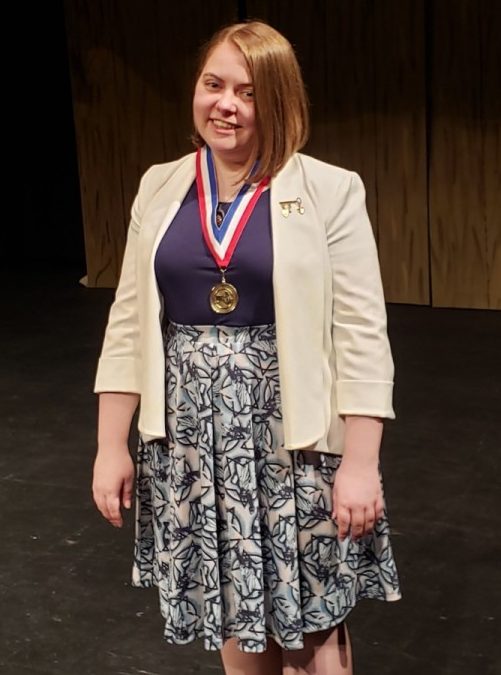 Jennifer is a native of Morris, MN who currently lives in the Twin Cities where she works as a research consultant for the DFL Caucus at the Minnesota House of Representatives. There she provides elected officials with additional research and analysis on proposed state legislation related to transportation, housing, and capital investment.

This is Jennifer’s second time being voted as the best arguer in the Great American Think-Off. She was first voted “America’s Greatest Thinker” in 2014 when she argued that love motivates us more than fear. In securing the most votes in this year’s final round, Jennifer became one of just three finalists in Think-Off history to win the debate two times. The other two philosophers to win over the audience twice are Peter Hilts of Lakeville, MN (1994 and 2000) and Sam Dennison of San Francisco, CA (2006 and 2016).

Runner-up Armchair Philosopher, Rick Brundage of St. Paul, MN, out-argued David Lapakko of Richfield, MN to advance to the final round of debate. Before debating Rick, Jennifer Nelson first argued her position against fellow “yes” proponent, Louise Mengelkoch in the second round of debate. 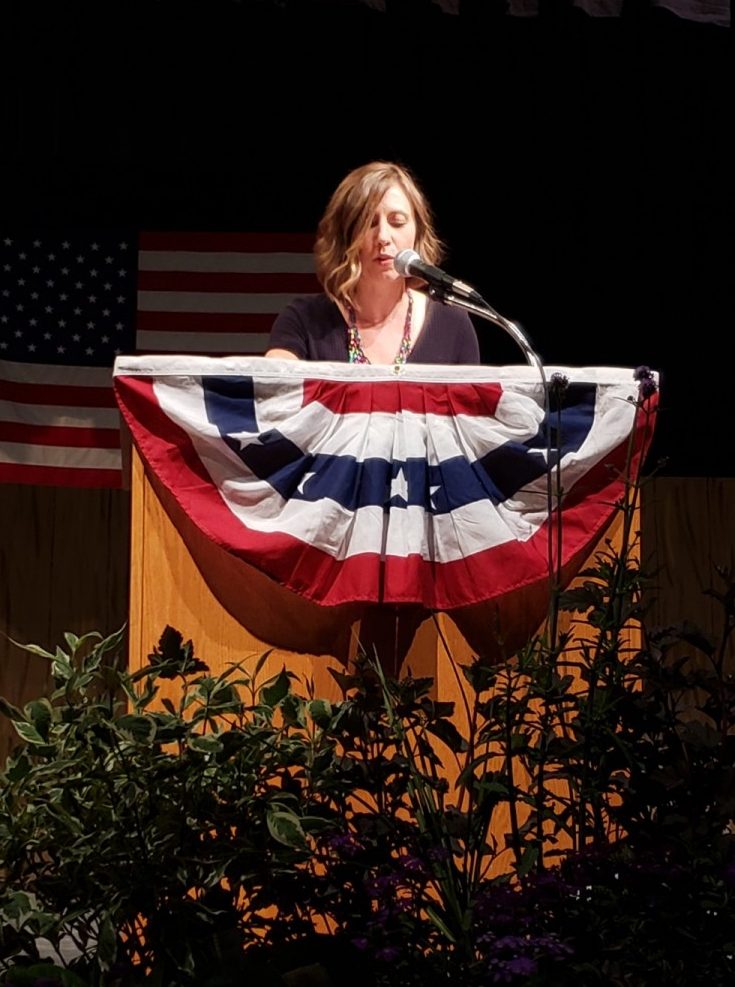 The 27th Annual Great American Think-Off was proud to have Ashley Hanson as this year’s moderator once again!

Ashley has founded multiple organizations that do collaborative, creative work in rural communities. She was recently named a 2018 Obama Foundation Fellow and a 2019 Bush Fellow. She spends most of her time on the road visiting with people in rural places and believes wholeheartedly in the power of play and exclamation points! Check out her talk about rural creativity at the Obama Summit HERE. Many thanks to Ashley for her thoughtful and spirited guidance throughout the debate.

In her introduction, Ashley asked the audience for a show of hands of first-time attendees and return attendees. Remarkably, it was about fifty-fifty. Although there were many local and regional faces in the crowd, there were many from the Twin Cities and beyond.

And now, in case you missed it, keep reading for a summary of the 2019 debate…

Round 1
Voting does NOT matter
David Lapakko vs.Rick Brundage 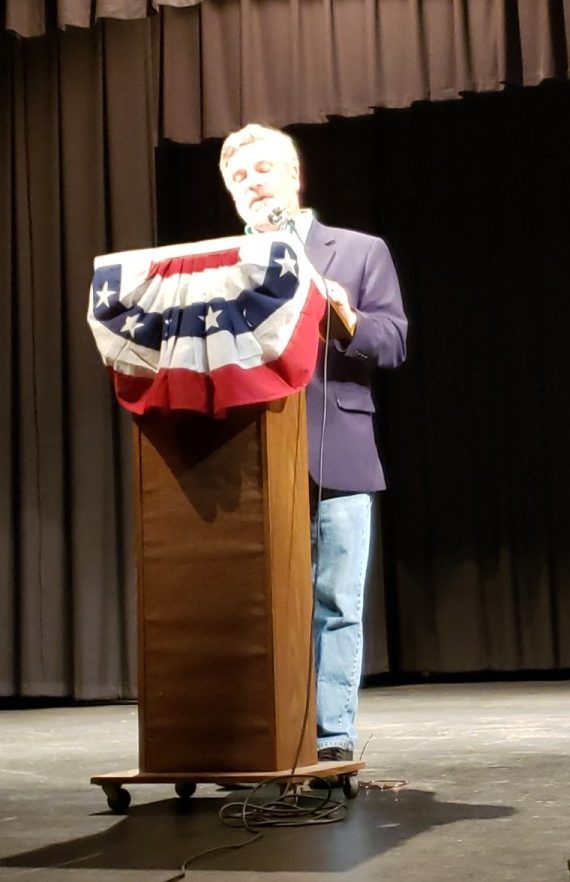 In the first round, David Lapakko and Rick Brundage both argued that voting does NOT matter. The audience selected Rick as the stronger proponent of this stance.

While Rick and David were in agreement that voting does not matter, David focused his argument on the idea that while voting is our civic duty, it does not matter, particularly in comparison to the power of lobbyists and political media analysts whose opinions and viewpoints reach millions of listeners and thus matter more than a single vote.

David has entered every Think-Off since 2013, has been on stage three times, and won in 2015. He says that he did not take the position because he thought it would be the less popular option. Instead, he suggested that voting as a method of fulfilling our democratic obligations is overrated.

“People vote and then say they’ve done their duty,” he said. “There’s more to it than that, like studying issues, selecting qualified candidates, and supporting them. Not to say voting isn’t important. It is.” 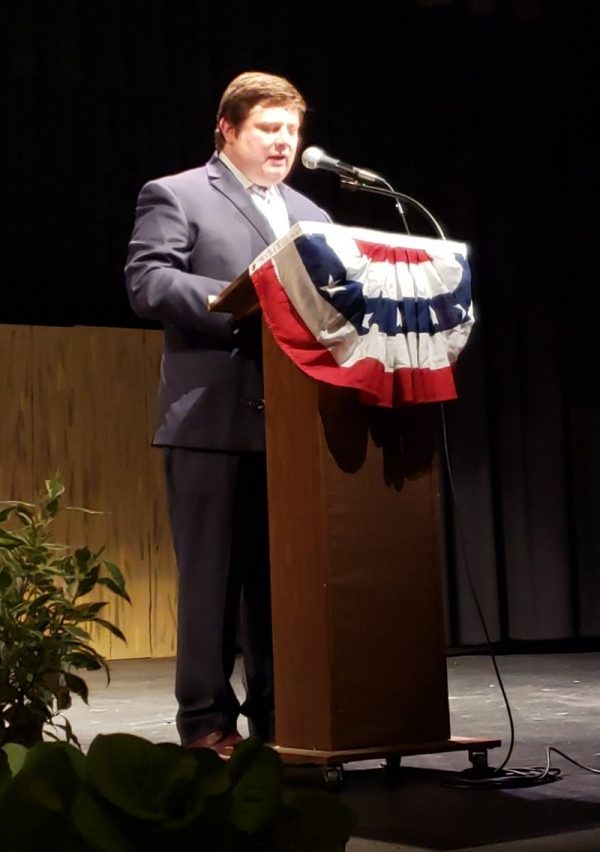 Rick Brundage, who also argued against the premise, is a first-time candidate. Last year, he convinced a fellow armchair philosopher to enter. This year, he entered his own essay. And won a finalist position.

Rick successfully argued that while voting COULD matter someday, it doesn’t now, because of the fact that every person currently cannot vote, and until everyone’s voices can be heard, voting doesn’t matter.

He also stated that in order for voting to matter, more profound change needs to happen at the base level of our democratic system. He posited that connecting with neighbors and having dialogue about the issues matters more than voting.

“We can’t wait two to four years for our voices to be heard!” 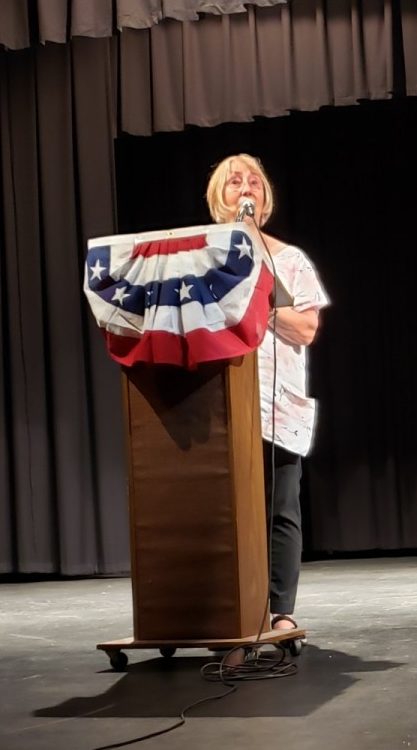 Round 2
Voting DOES matter
Louise Mengelkoch vs. Jennifer Nelson

In the second round, Jennifer Nelson and Louise Mengelkoch defended their sides.  Both argued their perspective that voting really does matter. Votes were cast. Jennifer moved to the final round.

Louise focused her argument on the idea that voting is one way to not only select a winner, but also to inform elected officials of the level of support (or lack thereof) from their constituents.

“Voting is a reminder that all politicians are only one election away from losing their jobs.” 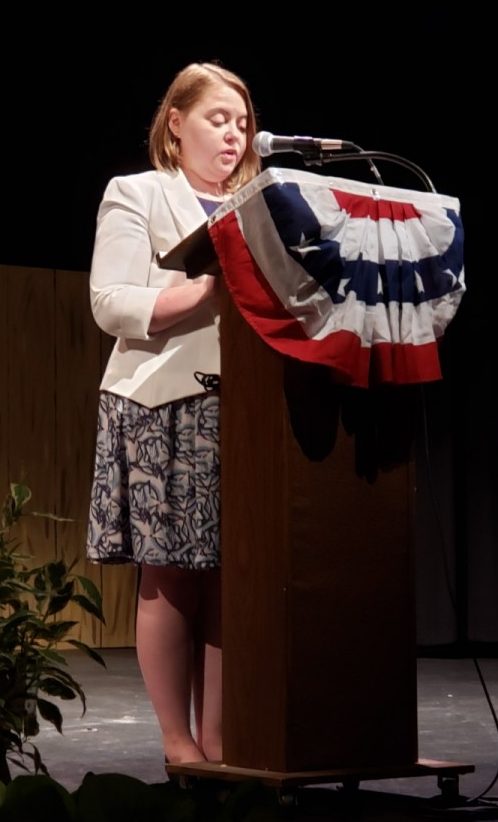 Jennifer agreed that voting matters, but focused more on the importance of the electoral process and the viewpoint that voting allows you to choose your elected officials who then make the changes their constituents want to see. She argued that voting matters because it is an essential part of the overall democratic process.

“Voting honors our past, shapes our present, and sends a message as to what kind of future we want to see.”

Final Round
Voting DOES matters vs. Voting does NOT matter
Rick Brundage vs. Jennifer Nelson 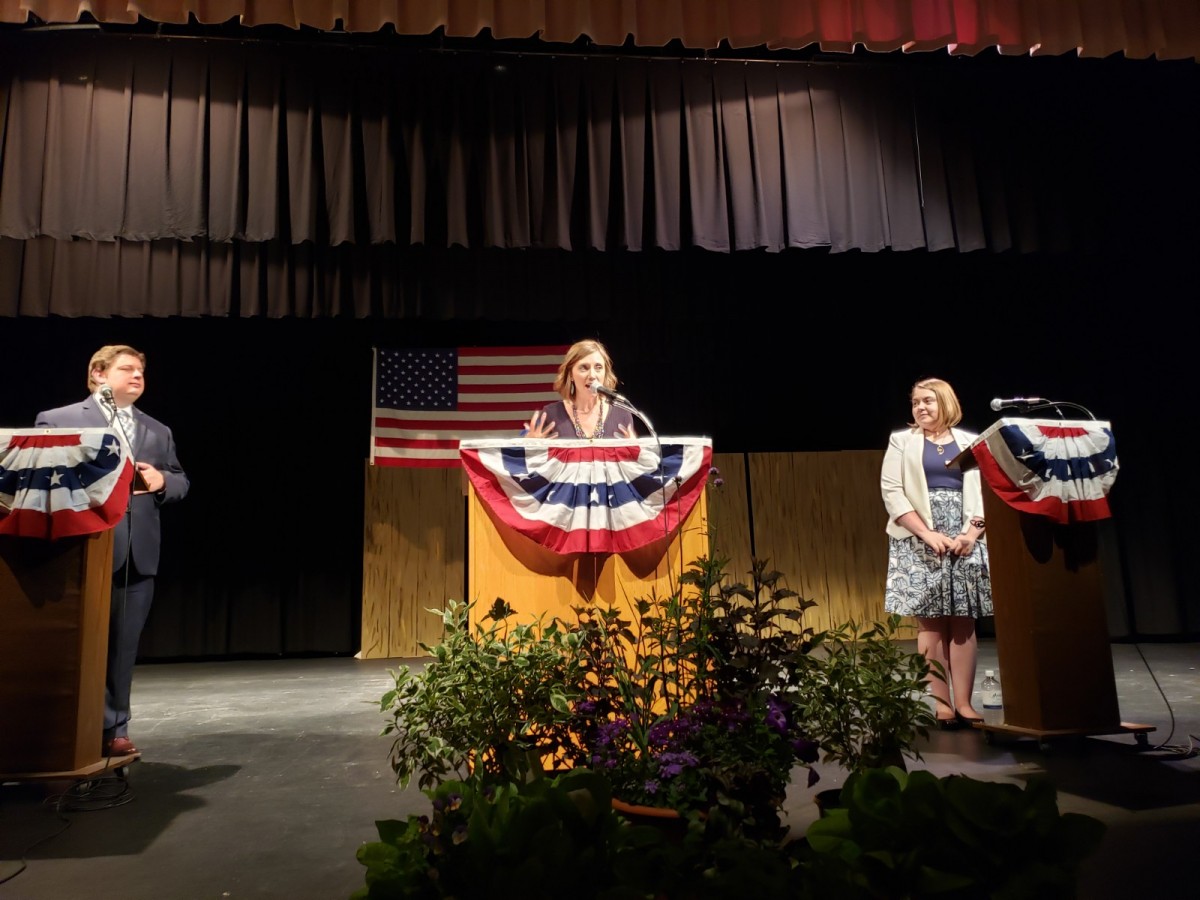 In the final round of debate, related topics such as disenfranchised voters and gerrymandering were brought forward in the thought-provoking debate questions, several of which were submitted by audience members during the first two rounds of debate. 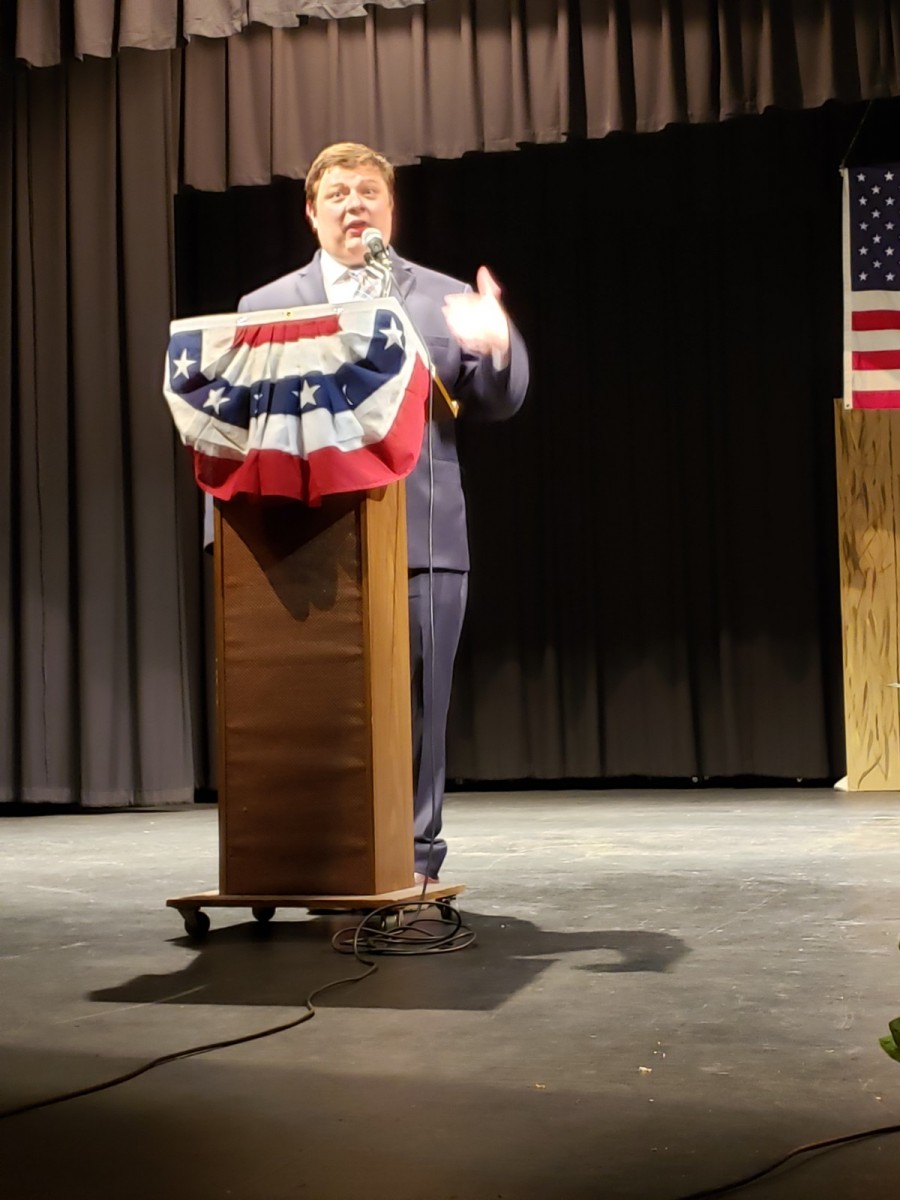 Rick focused his argument on the fact that voting does not matter because the democratic system is broken.

“Until everyone has the right to vote, and it is guaranteed for everyone, it doesn’t matter what any vote means.

He argued that voting can’t matter when there are so many disenfranchised voters, such as youth who have recently raised their voices on gun control politics through public protests, that are not granted the right to vote. He also spoke to the misplaced power granted to elected officials.

“When politicians get elected, it gives them moral cover to do the things they want, without thinking of the interest of their constituents.” 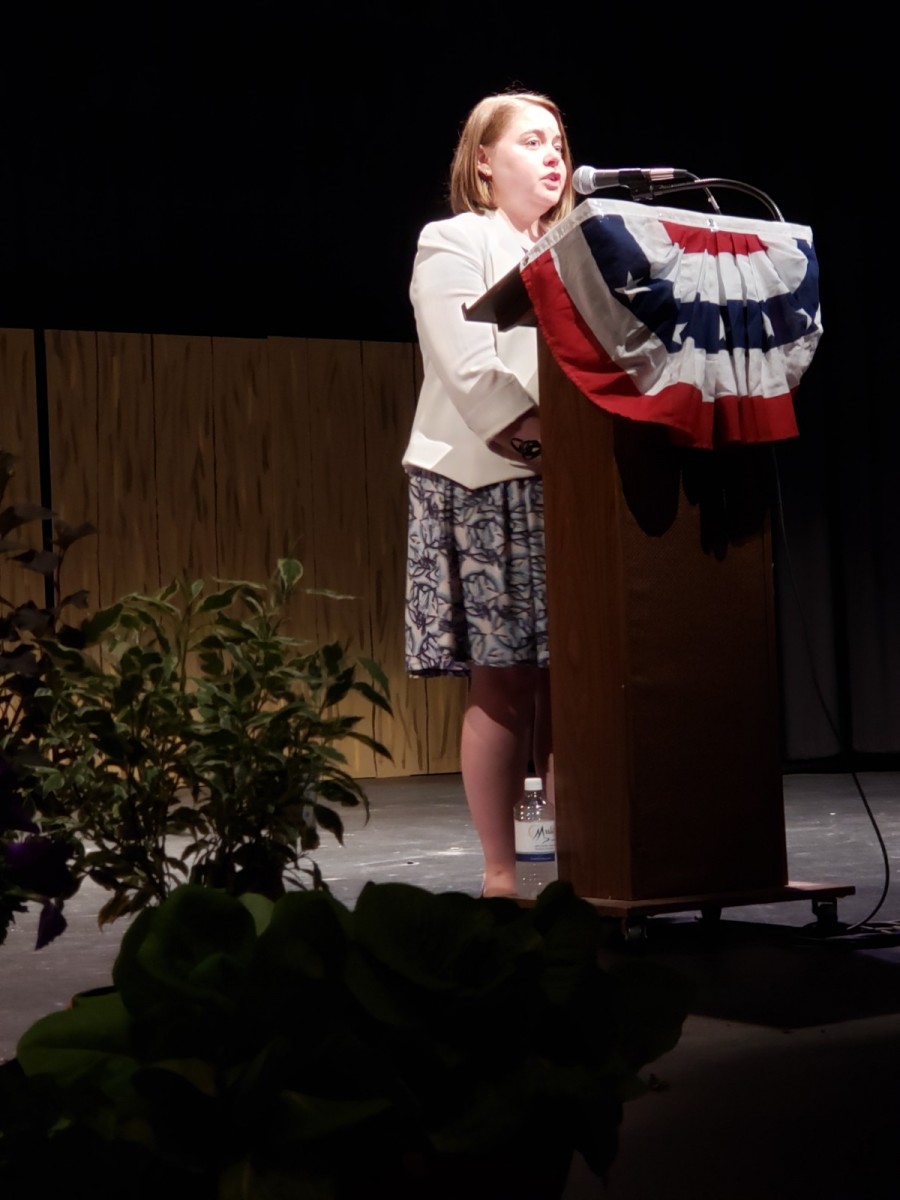 Jennifer argued that disenfranchising only matters because voting matters. She also stated that while we have a political system of checks and balances, that doesn’t mean there aren’t injustices within the branches, which then increases the necessity of voting. She also reiterated her stance that voting matters because it is part of the larger ecosystem of democracy.

“Voting is a so-called gateway drug to democracy, and the first exposure to exercising power and having a voice.

In her closing statement, Jennifer responded to the opening line of Rick’s essay, which speaks to the frustration of voting. She argued that there are a lot of things that we do in life that are frustrating, but that doesn’t mean they don’t matter. She also posited that the only way to change the system is to change the people in power, through our votes.

Voting does not exist in a vacuum. While an argument can be made that a single vote doesn’t often change an election, voting still matters as part of the overall democratic system.

Following this lively debate, the audience voted that Jennifer made the best argument to support her assertion that voting DOES matter, and thus Jennifer was awarded the gold medal and the title of “America’s Greatest Thinker” for 2019.  The votes are cast based on who best defends their claims — and thus focuses not on what you believe, but who you think made the better argument. 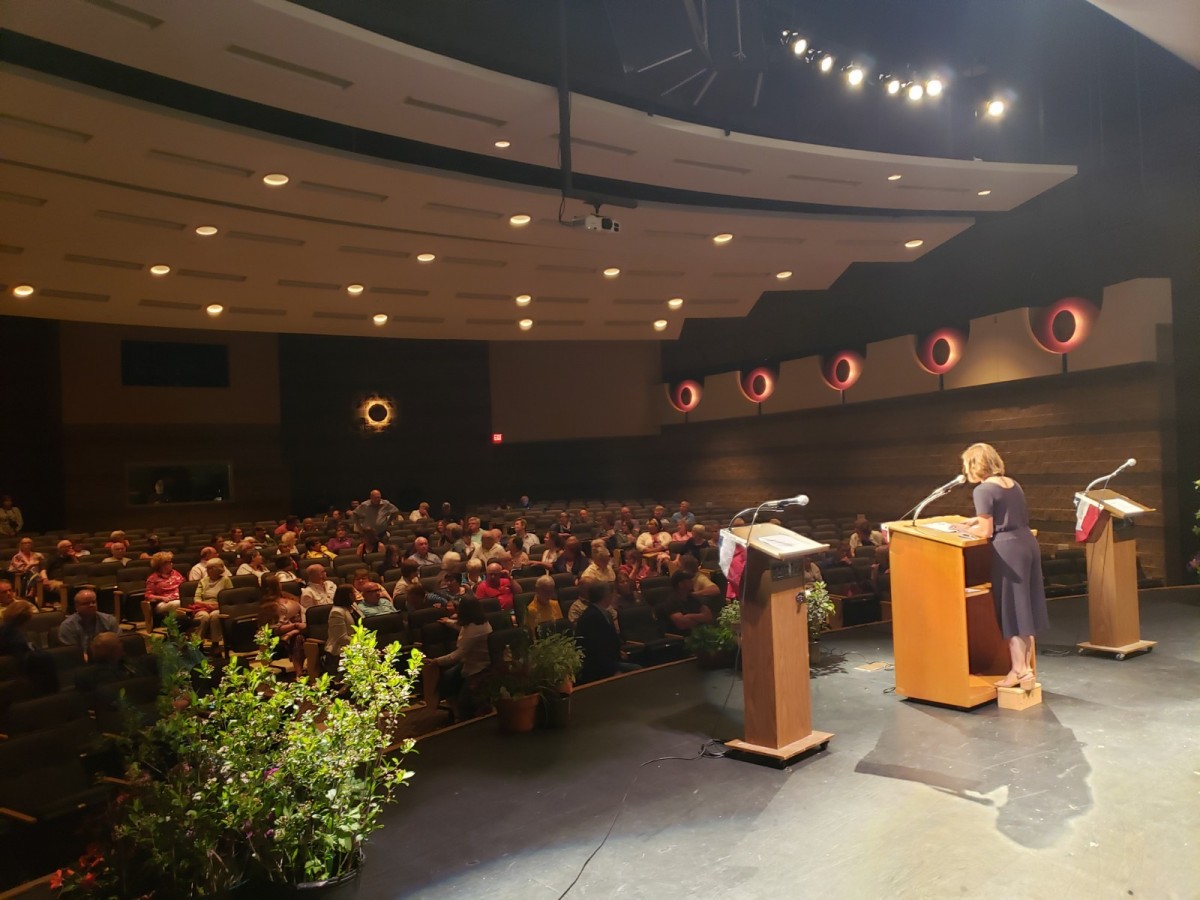 It was another great audience at this year’s Think-Off. Sue and Dale Adams of rural Aldrich attended the debate last year for the first time, and found it a stimulating evening of civil discourse, not what they were likely to find on television. They deemed it worthy of returning this year, and making it an annual event for them.

Rod Nordberg of Park Rapids is a regular attendee of the Think-Off. As a member of the Park Rapids Arts and Culture Commission, he feels a strong affinity for supporting regional artistic and cultural events. Rod points to Park Rapids’ Great American Story, an annual storytelling event, as a spin-off of the Great American Think-Off.

The Cultural Center would like to express a warm thank you to all four finalists, all the event sponsors, the board, staff, committee and volunteers, and all the first-time and repeat attendees to the debate. It takes all of these people to make a successful event, and together we made it another smashing success! THANK YOU, and see you again next year. 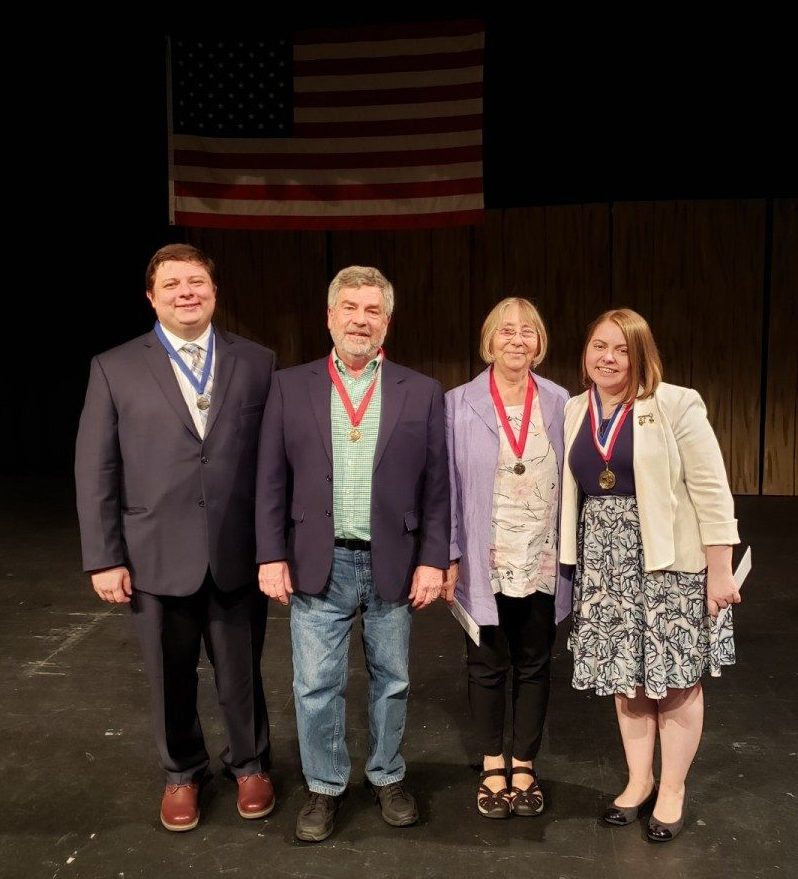 See the history of the past 27 years of questions here: Think-Off History