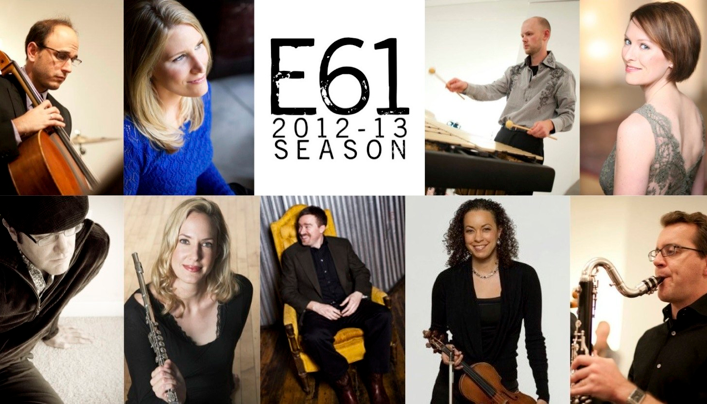 “Devotees of new music, of whatever provenance, should keep a close eye on this accomplished, ambitious band”
-Larry Fuchsberg, Minneapolis Star Tribune

Ensemble 61, a six-member new and experimental classical music group from Minneapolis, will perform Water Music at the James W. Mann Center for the Performing Arts in the New York Mills School on Saturday, January 12th at 7:30pm.  The concert is part of the winter/spring concert series of the New York Mills Cultural Center.  Tickets are available by calling 218-385-3339.   You can also email your reservation to info@kulcher.org.

Vox Balaena (Voice of the Whale) by George Crumb
Steamboat Bill, Junior by Magnus Lindberg
I Water, I Night by Morgan Krauss
The Waters of Time by Kirsten Broberg

Ensemble 61 brings new and experimental classical music to the public through concerts, education/outreach programs and community engagement.  Seven nationally renowned musicians—soprano, flute, clarinet, piano, percussion, violin, cello and composer—make up Ensemble 61.  It is the only mixed chamber ensemble in Minnesota dedicated to the performing and recording of the music of our time.

Members of Ensemble 61 have been featured by internationally recognized presenters such as the American Academy in Rome, Sonic Fusion Festival in Edinburgh, Bang on a Can in Massachusetts, SEAMUS National Conference, June in Buffalo in New York, the Museum of Contemporary Art in Chicago, Soundfield New and Experimental Music Festival in Chicago, Orchestra Hall in Minneapolis and the Walker Art Center in Minneapolis.

Its artists have received prestigious awards from the Fulbright Foundation, the McKnight Foundation, the Fromm Foundation at Harvard University, Aaron Copland Fund, the Ditson Fund, the Minnesota State Arts Board and the American Composers Forum.  Their work has been featured by National Public Radio’s Performance Today, the American Music Center’s NewMusicBox broadcast and publication, Tutti magazine and Voice and has been commercially released by Innova, Parma/Navona and BIS records.

Ensemble 61 was founded by composer Kirsten Broberg and percussionist Erik Barsness.  The group takes its name from the Historic Highway that runs from Duluth to New Orleans and is the inspiration for many artists including Bob Dylan.

This activity is made possible in part by a grant provided by the Minnesota State Arts Board through an appropriation by the Minnesota State Legislature from the State’s Arts and Cultural Heritage Fund with money from the vote of the people of Minnesota on November 4, 2008. Ensemble 61 also thanks Eide Bailly LLP for its generous support of this project.