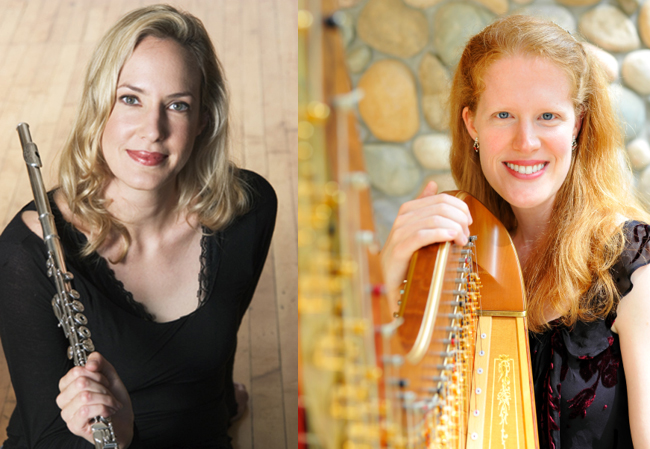 Flutist Linda Chatterton and harpist Rachel Brandwein will be giving a concert on Thursday, March 3, 2022 at 7:30 p.m. in the New York Mills Regional Cultural Center’s visual arts gallery intimate listening room space. Their concert will have a mix of classical and folk music, with a special piece of music inspired by a piece of New York Mills’ history!

The concert will include the music of Ralph Vaughan Williams, Jacques Ibert, Austin Ho Kwen Yip, Robert Beaser, Vincent Persichetti, William Grant Still, Georges Bizet and the regional premiere of “Minnesota City Sketches” by Rachel Brandwein. Linda and Rachel will share more information about the pieces and composers during the concert. 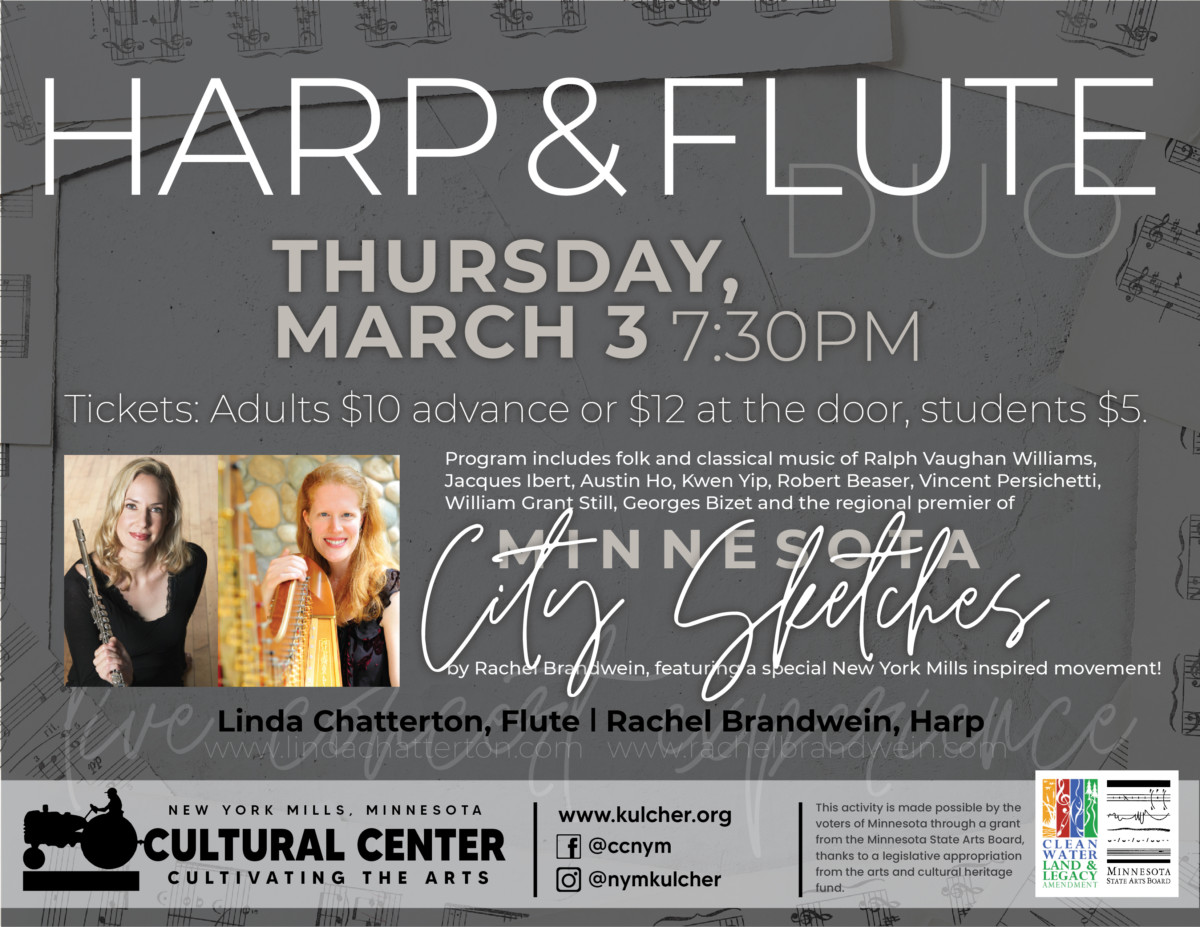 Linda and Rachel have been performing together since 2013. Their collaboration has included concert tours in the US and the Far East, including a Minnesota State Arts Board Arts Tour grant to present concert and educational residencies in four greater Minnesota communities. Their repertoire encompasses traditional concert repertoire for flute and harp, their own arrangements for flute and harp of classical, folk and contemporary works, and new works written for them.

While in New York Mills, Rachel and Linda will also be performing for students at the New York Mills Public School in grades 5-12, and residents of Mills Manor as part of this Minnesota State Arts Board funded residency, brought to the community in partnership with the New York Mills Regional Cultural Center.

Tickets for the public concert are $10 for adults ($2 member discount) or $5 for students. You can buy tickets online by clicking the link below, or pay at the door the night of the concert. Students tickets can be paid for at the door, or use the “Donate” button in the online event page (click below). Light refreshments available. COVID safety guidelines observed. Please stay home if ill. Full refunds provided if unable to attend due to illness.

This activity is made possible by the voters of Minnesota through an Arts Tour grant from the Minnesota State Arts Board, thanks to a legislative appropriation from the arts and cultural heritage fund. 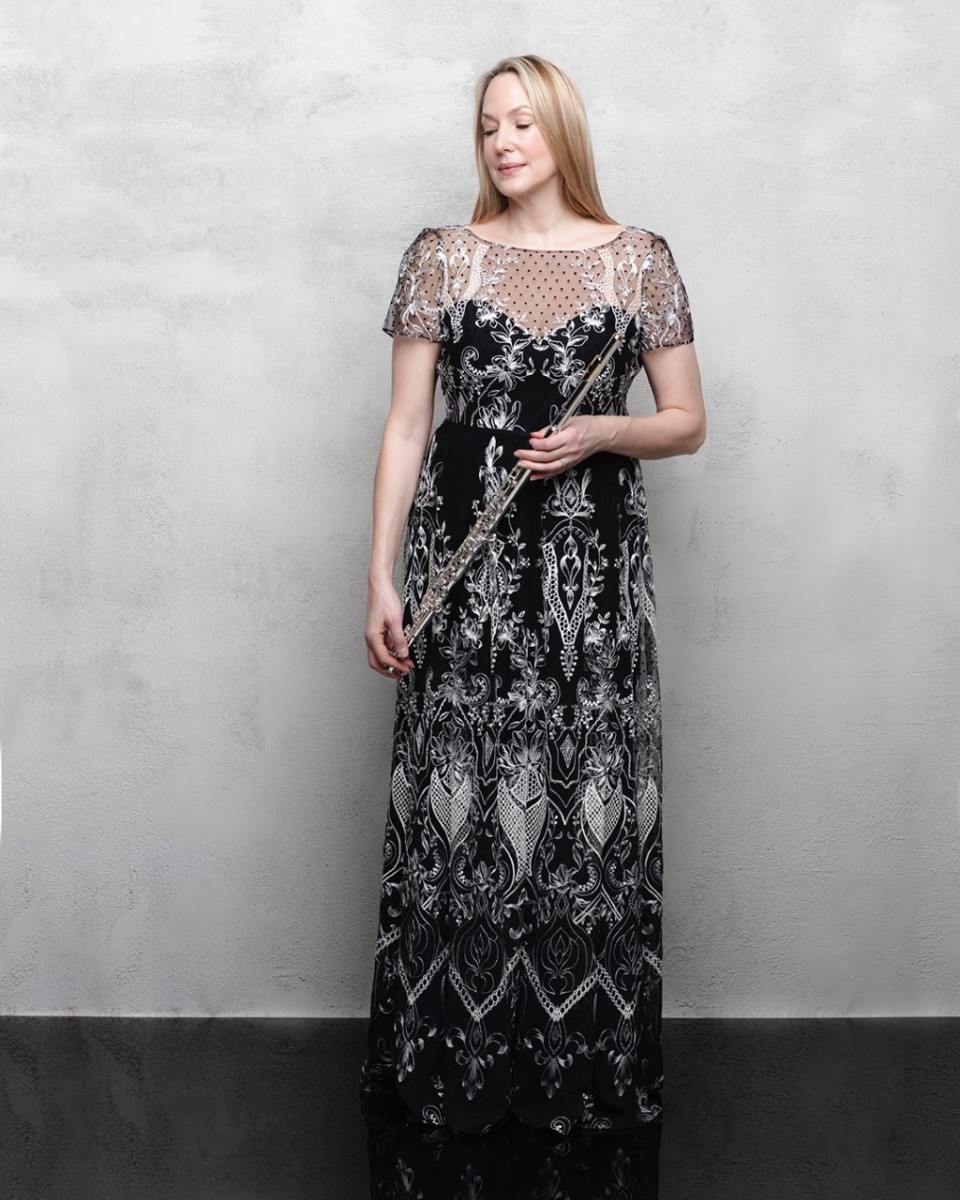 “The kind of performance that sparks wild standing ovations. Definitive” says the American Record Guide of flutist Linda Chatterton. Ms. Chatterton has performed in New York at Carnegie Hall and Lincoln Center, was a featured recitalist on the prestigious Dame Myra Hess series in Chicago, and has been heard throughout the US many times on National Public Radio’s Performance Today.  A Minneapolis-based artist, Ms. Chatterton has performed with numerous groups including the Minnesota Orchestra, and she tours regularly as a duo performer with harp, guitar and piano. As a concerto soloist, highlights include many performances of traditional and contemporary repertoire in the US and Europe. She has served as a US State Department Arts Ambassador overseas.

2021-22 projects include concerts in the US with pianist Matthew McCright; concerts in Montenegro, Bulgaria, Macedonia and Cuba with the Minneapolis Guitar Quartet; concerts in the US with guitarist Maja Radovanlija in a Chamber Music America Residency Partnership project; and a series of residencies in underserved communities throughout greater Minnesota with harpist Rachel Brandwein as the result of a Minnesota State Arts Board Arts Tour grant. In 2023, she and Ms. Radovanlija will be premiering a major new work written for them by Brazilian-American composer Clarice Assad, through a Chamber Music America Classical Commissioning grant.

Past projects include concert tours in China, Thailand, Hong Kong and Taiwan; a concerto performance with the State Hermitage Chamber Orchestra in Moscow, Russia, with a master class at the Moscow Conservatory; concerts and master classes in the UAE, Spain, Cuba, Montenegro and Romania; a concert tour of Australia with pianist Matthew McCright; and a sold-out concert at the DiMenna Center in New York City of contemporary chamber music by Hong Kong composers. Her London concert at the famous St. Martin-in-the-Fields concert series with McCright garnered the review: “Throughout the concert Chatterton displayed lovely tone and a fine sense of line, with technical prowess which was always understated, resulting in some involving and intelligent performances.”

She is the first and only two-time flutist to win a McKnight Artist Fellowship for Musicians, and she has received many awards from the Jerome Foundation, the Minnesota State Arts Board and the American Composers Forum.

In addition to her concert schedule, Ms. Chatterton is highly regarded for her insightful master classes, and she has served as a mentor to music students at the University of Minnesota’s School of Music.  In a related realm, Ms. Chatterton often can be heard giving her “It Sounded Better at Home!” workshop series based on her extensive work on the psychology of optimum performance. She is currently working on “It Sounded Better at Home!” as a book.

Ms. Chatterton has recorded on the CBS Masterworks, Innova, and Gothic labels, and has also independently released seven compact disc recordings. Her most recent recording, “Songs and Dances for Solo Flute,” was released in September of 2019.

Ms. Chatterton is a Powell Flute Artist and plays a custom made platinum Powell flute. 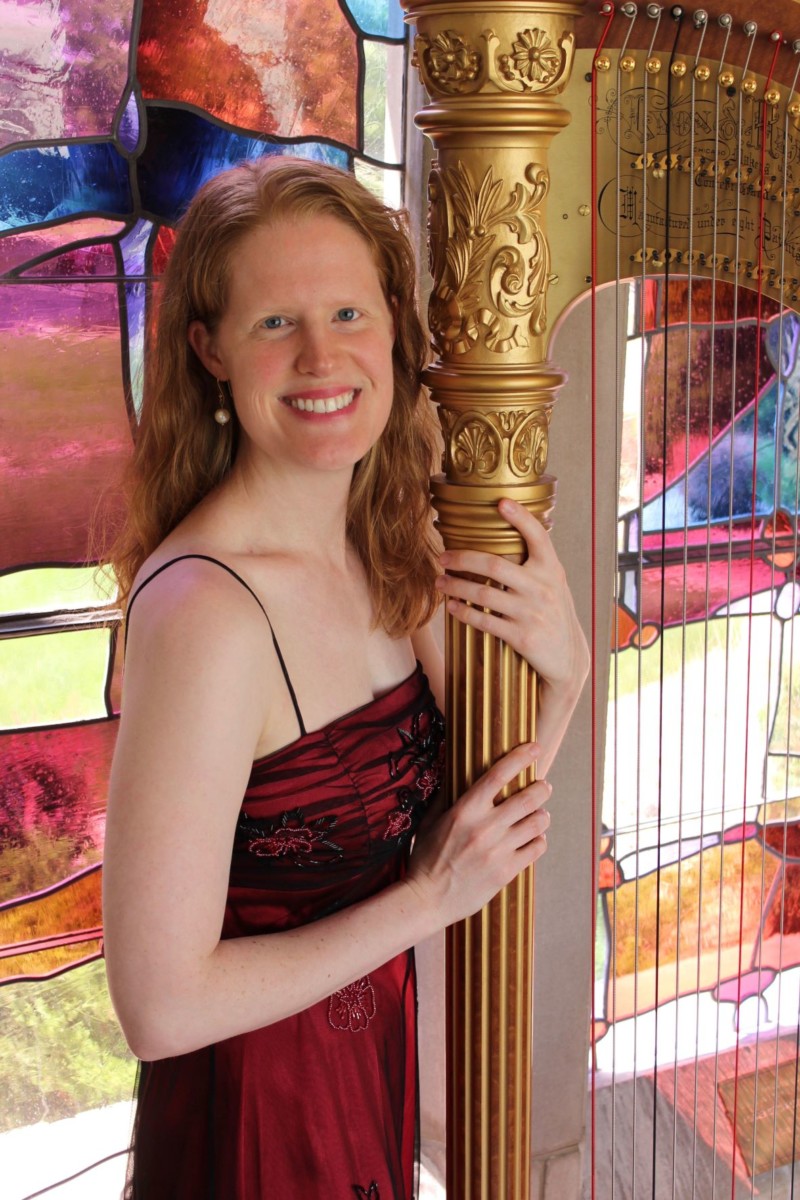 In addition to solo, chamber, and orchestral appearances in Ireland, Taiwan, and China, Rachel performed a nine state, fifteen-concert tour with Trio Matisse (flute, cello, harp), sponsored by Allied Concert Services. She performs with various professional ensembles around the country, such as Vocal Essence, Conspirare, and the National Lutheran Choir, with whom she also records. Rachel has played with The Saint Paul Chamber Orchestra and the Minnesota Orchestra, under conductors Osmo Vänskä, Stanisław Skrowaczewski, Yan Pascal Tortelier, and Mark Wigglesworth. In 2016 she debuted in Hong Kong, and Chiayi, Taiwan, with flutist Linda Chatterton. They concertized on a tour of the Midwest in 2018, and will present several concerts on tour in Minnesota in 2021-22 that are funded by the Minnesota State Arts Board. Rachel toured the Midwest as a featured concerto soloist faculty member with the Luther College Symphony Orchestra in 2018 and performed another concerto with them in 2020. She performed as guest faculty on tour with the St. Olaf Band, also in 2020.

Rachel served on the committee of the American Harp Society Young Composer’s Program in 2017 during the National Institute. She co-presented a student original composition workshop and concert with composer Libby Larsen. In 2019 Rachel produced her second album of original harp solo and ensemble works, String Motifs, which can be purchased on CDBaby.

Rachel earned degrees from Stony Brook University (DMA), The Juilliard School (MM), and University of Michigan (BM), and studied harp and French for one year in Paris and Lyon, France. Rachel is on faculty at St. Olaf College and Luther College, and has presented master classes throughout the United States and in Asia. Her goal as an educator is to help her students appreciate and fulfill their artistic potential with confidence, creativity, and courage.

This activity is made possible by the voters of Minnesota through an Arts Tour grant from the Minnesota State Arts Board, thanks to a legislative appropriation from the arts and cultural heritage fund.