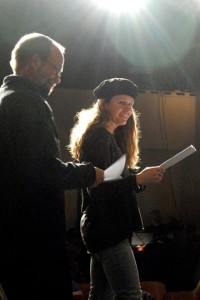 In the retreat house for a short stay in early April is artist Britt Aadmodt from the Twin Cities.  Britt was born on the Chesapeake but migrated to Minnesota, the land of her ancestors. Those ancestors are the source of her tales about the immigrant women and men who settled the Iron Range in the early part of the 20th century. The author of Superheroes, Strip Artists & Talking Animals, Britt has published short stories and poetry, and is a Twin Cities-based storyteller, playwright and performer with the touring variety show the Great Northern Radio Show. Her autobiographical play Brute Camp will premier at the 2014 Minnesota Fringe Fest.

During her residency, Britt plans to work on Brute Camp in preparation for the Northlands (Wisconsin) and Minnesota Fringe Fest. Brute Camp is a 50-minute play about two women, one 28, one 18, from different worlds whose destinies crash into each other and boil over in the pressure cooker of Air Force basic training.  It’s a story about discovering oneself and finding friendship with the most unlikely of people in the most unlikely of places.